The #UpForSchool petition collected more than 10 million signatures and was delivered to the United Nations in September 2015. It helped to spotlight the right of every child in the world to be in school and learning.

About the #UpForSchool Campaign

More than 10 million people worldwide signed the #UpForSchool petition, which was organised by the A World at School movement. It was the biggest petition for education in history and was a massive global declaration that every child deserves a quality education.

In September 2016, the petition was handed over to world leaders who were gathered for the United Nations General Assembly. Singer and campaigner Shakira presented a book containing the signatures to Gordon Brown, UN Special Envoy for Global Education.

Since the campaign and petition, considerable progress has been made - including education being at the heart of the Sustainable Development Goals. The Education Commission has come up with a bold plan to get every child in school by 2030 and the Education Cannot Wait fund for education in emergencies has been launched.

What's been happening in the #UpForSchool campaign? 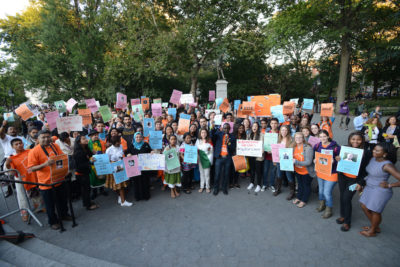 Here are some of the reasons why so many people have signed - and why many millions more will join the #UpForSchool campaign.
news 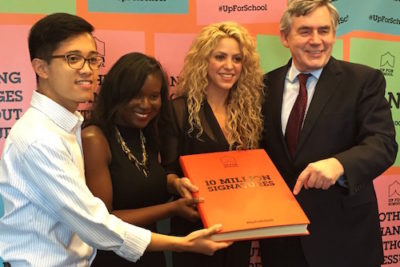 .@Shakira Bird gets the pigs to actually do some good for a change! #UpForSchool --> http://t.co/8fdhHzyKMH

R I S E - made by Vietnamese-American director, writer and producer Steve Nguyen - was premiered at the #UpForSchool Town Hall in New York.
Show more ▼