Many also suffer from discrimination or living in disadvantaged communities in the developing world, according to a new global index by Save the Children.

In a school in Senegal, 15-year-old Khadidiatou strives to balance her studies with her roles as a mother and a wife. In a clinic in Mali, 10-month-old Mamadou is severely malnourished as his family struggle to survive after five years of conflict.

The teenage girl and baby boy have little in common, yet they face the same threat - having their childhoods cut short.

At least 700 million children - around one in four - have been robbed of their childhoods too soon by factors ranging from illness and conflict to child marriage and being out of school, according to the End of Childhood Report and Index by Save the Children.

Most of these children live in disadvantaged communities in developing countries, where they have been bypassed by progress in health, education and technology that has improved the lives of many of their peers, the charity said in the report.

"Many of these children suffer from a toxic mix of poverty and discrimination, and experience several childhood enders," Save the Children International's Chief Executive Helle Thorning-Schmidt told the Thomson Reuters Foundation.

The hardest-hit children live in West and Central Africa - which accounted for seven of the 10 bottom-ranked countries in Save the Children's first "End of Childhood" index, ranking 172 nations according to where childhood is most intact or eroded.

Niger, Mali and Central African Republic were among the five worst-ranked countries for children in the annual index, which was topped by Norway, Slovenia and Finland.

While conflict and poverty are major threats to the futures of children, many also suffer because of discrimination, with girls, child refugees and those from ethnic or religious minorities among the most vulnerable, the charity said.

Countries must tackle discriminatory policies and practices, boost data and invest in public services if the world is to meet the United Nations global development goals set in 2015, said the report.

The 17 Sustainable Development Goals (SDG), which committed to end extreme poverty and inequality by 2030, pledged to reach first those who are most in need and to leave no one behind.

"We have no chance of achieving the SDGs unless the basic right to childhood is protected," Thorning-Schmidt said.

We have friends who have never been to school or were taken out because of marriage. We feel fortunate to still have a chance of a good future.

Worldwide, half as many children under the age of five now die from preventable causes compared to 1990, while the number of those out of school or trapped in forced labour has declined by around one third since 2000, according to various studies.

Despite this progress, at least a quarter of the world's children are faced with one or more threats to their future, with early marriage and pregnancy linked to the risk of infant mortality and missing out on education, Save the Children said.

Childhood should be a time to play, learn & grow. Our #EndofChildhood Report reveals millions are being cut short > https://t.co/9ZFLmn2384 pic.twitter.com/nSkGadVKel

In a school in the Senegalese city of Thies, Khadidiatou and two other child brides explained how they were the "lucky ones".

"We have friends who have never been to school or were taken out because of marriage," said Khadidiatou, whose husband's family allowed her to continue her schooling after being wed at 14. "We feel fortunate to still have a chance of a good future.

Yet these deaths are more often caused by disease, malnutrition and poor healthcare than by bombs or bullets. Aid agencies must therefore think beyond traditional aid and integrate long-term development approaches and resilience-building efforts into their response to crises, experts say.

"Temporary solutions aren't good enough anymore ... we need to realise people could be in crisis situations for years rather than months and work towards making them much more resilient," said UNICEF spokesman Patrick Rose.

Violence is a growing concern with more and more children living in conflict, where they are twice as likely to die before five as those in peaceful nations, said Save the Children.

In Central African Republic, Mali and Nigeria - countries beset by militant violence and mass displacement - more than one in 10 children die before their fifth birthday, compared with one in 500 in a country such as Finland, World Bank data shows.

The world has a long way to go if it is to meet its target of ensuring all children have a full childhood - including access to healthcare and education - by 2030, according to Save the Children.

Governments should invest in basic services for children and ensure they are affordable, end policies and practices that discriminate based on a child's gender or ethnicity, and count all children in data used to measure progress on the SDGs.

Yet there is a lack of data on the most marginalised parts of society, and investing in efforts to boost data collection is often a low priority on the development agenda, activists say.

Traditional data gathering methods such as household surveys often exclude the poorest and most vulnerable children, such as refugees, nomads and those living on the streets, according to Lumos, a children's charity founded by author JK  Rowling.

Sexual violence and human trafficking would have been included in the Save the Children index as factors that can end a childhood early - if the right data had been available, the charity said.

"We need data on particularly vulnerable segments of the population," said Soumya Chattopadhyay, a senior research fellow at the Overseas Development Institute (ODI) thinktank in London. "But ... we suffer from a severe lack of financing and initiatives to fill the gaps."

Such strategies may anyway come too late for many of the 700 million children whose childhoods are under threat today.

In Mopti in central Mali, intensifying jihadist violence has left children like Mamadou on the brink as they endure a combination of poverty, hunger and poor health.

"As long as there is a crisis, we cannot live easily ... or think about the future," said Mamadou's mother Aissatou.

Childhood should be a time to play, learn & grow. Our #EndofChildhood Report reveals millions are being cut short > https://t.co/9ZFLmn2384 pic.twitter.com/nSkGadVKel 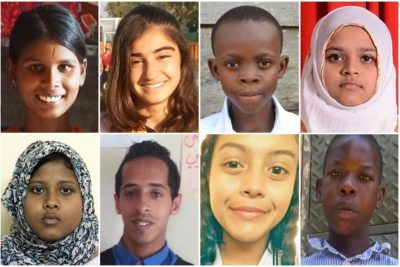