A special event is being held in London today to mark the launch of Theirworld's #RewritingTheCode campaign and International Women's Day - you can get updates, pictures and videos here.

Theirworld's #RewritingTheCode campaign is calling out the hidden cultural codes that stop women and girls from realising their full potential.

It aims to raise awareness of the "embedded" social values that cause gender inequality. The campaign uses the words and symbols of digital code and builds on our work in setting up Code Clubs for girls in Kenya, Uganda and Nigeria.

At a special Theirworld #RewritingTheCode International Women's Day Breakfast today, business leaders, politicians, campaigners and opinion formers will help launch the #RewritingTheCode campaign, which is supported by WPP agency The Partners in collaboration with other WPP digital and creative marketing agencies.

From 8.15am today, this blog will bring you news, pictures and highlights from the gathering, which is hosted by the Institute of Directors (IoD) in London.

We’ll hear from Lynne Reid Banks, the author of The L-Shaped Room and one of the UK’s first female TV reporters, and screen legend Leslie Caron, who starred in the film adaption of Banks’ groundbreaking novel.

We’ll also be joined by Anne-Marie Imafidon, co-founder of the Stemettes, an award-winning social enterprise aimed at inspiring women to get into science, technology, engineering and maths roles.

We want to hear how YOU are #RewritingTheCode for girls and women around the world #IWD2017 Join the conversation: https://t.co/kleH97FMmX pic.twitter.com/0lV89a9e5Y

She’ll encourage the attendees to discuss the codes that need to be rewritten in four different areas - technology, media and social media; business and the workplace; school and education; and fashion, arts and culture.

Before we start the event, you can learn more about the campaign launch. And read some amazing interviews in our Inspiring Women series to mark International Women's Day tomorrow.

As our guests arrive, here's what some of them are saying on social media...

On my way to an inspiring breakfast with @SarahBrownUK #InternationalWomensDay @theirworld thanks @RoseandWillard for invite pic.twitter.com/bco0V8Gtj0

#RewritingTheCode breakfast for International Women's Day, representing our work to get all girls to school in #Afghanistan pic.twitter.com/6TCEYeOywt

It's 8.45 am and the event begins - here are some guests making the "embedded code" symbol that we use in the #RewritingTheCode campaign.

Sarah Brown, Theirworld President, opens the event and says that - while a breakfast to mark International Women’s Day has become a regular occurrence - this is the first time men have been invited.

“Today is about exposing codes that are often hidden out of view so I want to share that the number of men in the room roughly reflects the number of women in the boardroom in Britain today,” she explains.

“We know we can’t look at gender statistics as a single issue.

"It is important that we look at intersectionality to find out what is really happening.

"We know that sexism is layered with racism, classism, ableism, homophobia, transphobia, xenophobia and belief-based bigotry,” she says.

“But the aim of this morning is to discuss progress so far on feminism, gender equality and ideas about how we move forward.”

As just 19% of seats on the boards of the world’s largest companies are held by women, only one or two men are on each table at today’s event.

Great to see such a packed house here joining @Theirworld in our#RewritingTheCode this morning for #IWD2017. pic.twitter.com/WHRk951gnQ

Now a very special guest is on stage. Leslie Caron has danced with Fred Astaire, won multiple awards for her work on screen and championed feminism and equality throughout her career.

Leslie says she witnessed the change that World War II had on the expectations of women.

“I think I am part of this generation which thank God doesn’t exist any more," she says. "Young girls who were expected to marry rich men thanks to the dowry.

"When the war came and it became obvious that I wasn’t going to have a dowry, my mother decided that she better have a job and I was taken to ballet class which I adored.”

In 1962, Leslie starred in the film adaption of Lynne Reid Banks’ first novel The L-Shaped Room, as Jane - a young, pregnant French woman who is forced by circumstance to take a room in a London squat.

Now we hear from the woman behind that influential book herself. Lynne Reid Banks, who has published multiple titles for adults and children, was committed to rewriting the codes faced by women in the 1960s.

“I’m ashamed now that I wasn’t a staunch and fighting feminist at the time [of writing The L-Shaped Room].

"I thought men were better, I wanted to be lesser than them and I found out different. I’m so glad that I’ve lived into an era when women can stand up for themselves,” she says.

Lynne thanks Leslie for bringing her character to life.

Sarah talks about how the idea for #RewritingTheCode started and tells the story of Niamh Deehan, a young creative who entered a competition to come up with a new campaign to tackle girls' education.

Niamh’s idea spotted the power of using the embed symbol in a campaign to show the underlying codes that can hold women and girls back.

Sarah thanks The Partners for working with Theirworld to develop the campaign and other supporters who have helped bring it to life, including the Common Ground team at WPP, MEC Global, Kantar Added Value, VML and Mel Varley from Theirworld’s Advisory Board.

She also announces the launch of a #RewritingTheCode T-shirt, created by Heidy Rehman, founder and managing director of Rose & Willard, and special embed code earrings from jewellers Astley Clarke.

Now we’re getting a glimpse of a special Rewriting The Code film, produced pro bono by Mark Lucas and the team at Silverfish Production in London.

Sarah hands over to Anne-Marie Imafidon, the Stemettes co-founder. STEM (science, tech, engineering and maths) has clearly been a lifelong passion for her.

She was awarded an MBE for services to young women and STEM sectors just months ago in the 2017 New Years’ Honours list.

It’s Anne-Marie’s job to get today’s table discussions started. Different tables have been asked to discuss the progress that is - or isn’t - being made when it comes to rewriting the code in their own sectors, whether that’s business, education, media and technology, or fashion and the arts.

Anne-Marie starts the groups off with some headlines for each sector. She says that - despite working with around 15,000 young women in Europe through Stemettes - statistics suggest a growing gap between the number of women in all professions worldwide (currently 57%) and the number working in the computing sector (only 25% of roles).

She also raises a recent news story reporting that girls as young as six think brilliance is a male trait.

Our guests are now being put to work and will try to answer these questions in their discussions:

We are LOVING @theirworld's #RewritingTheCode campaign! We are right there with you in rewriting the #girlcode for #womenintech. BRAVA👏! pic.twitter.com/PfFw9RBWUq

Each table will discuss their own experiences and come up with three ideas for actions that could be taken to support the campaign.

We'll bring you the results of the table discussions shortly.

What better way to end today’s event than by recognising women who are rewriting the code every day? Sarah announces two award winners - Khalida Popal and the female White Helmets.

Khalida has been a footballer all of her life and became the first captain of Afghanistan’s female football team in 2007.

'I have risked my life playing football and standing up for women's rights' @khalida_popal #RewritingTheCode #IWD2017 pic.twitter.com/6NGkDKQ6Ln

She had to flee the country because of the backlash she and the team faced for playing sport, seeking asylum in Denmark.

She hasn’t let her experience stop her working for her country, her team and for women who want to play sport.

Instead she founded the organisation Girl Power and is event director of the Afghanistan women’s football committee.

She receives the Theirworld Challenge Award 2017 from writer, broadcaster and women’s equality champion Sandi Toksvig in recognition of her personal courage in rewriting the code.

“I believe in women power and that’s why I have fought my entire life for women’s rights.

"I am a woman and I know my strengths, my power ... how my voice and thoughts can change something."

Two of the female White Helmets, Manal and Gardenia, have travelled from Syria just to receive the Theirworld Hope Award 2017 and represent their colleagues.

They are members of the Syrian Civil Defence Force who have become famous worldwide for their courage into rescuing people from bombed buildings.

“These women are battling every day to save the lives of adults and children caught in a raging conflict in Syria. These women save lives in the midst of brutality and cruelty,” says British MP Alison McGovern, who is presenting the award.

“Today we rewrite the code and honour the women who also form a vital part of Syria’s Civil Defence force. Their faces are not so familiar, their names not so well known - but they work just as tirelessly as their male counterparts ... They represent hope.”

Alison presents Manal and Gardenia with the honour, to a standing ovation.

“I know that many of you don’t expect a woman to be in the Syria Civil Defence, as we are not in the media so much. The reason for this is that the ladies have some concerns about being captured by the regime forces or harm to their families,” says Manal.

So proud of our women in @SyriaCivilDef awarded 2017 Hope Award. Women can do anything, including rescue. #RewritingTheCode pic.twitter.com/Dys5ihLtvs

“We are so proud because we are saving more than 85,000 people from under the rubble. But we will be happier if we stop this war and let people go back to their homes and help them rebuild their country.”

Gardenia explains that the White Helmets see women as having a role and not as the victims of war: “We are not victims, we are women, we are powerful."

Before the awards were presented, we heard back from the discussion groups on women in education, business, technology and media, and arts and fashion.

Excited to be supporting the @theirworld #RewritingTheCode campaign this morning hosting their #IWD2017 breakfast pic.twitter.com/QLUQ71Jpog

In terms of education, this morning’s guests suggested including technology and gender equality in sex education in schools, especially how to behave online and how other people should behave towards you.

Participants suggested that more "collective endeavour" is required when it comes to understanding and rewriting the code around maternity leave and being a working mother.

In business, fashion and arts, it was agreed that women should celebrate each other’s successes more and amplify one another’s voices in doing so.

It was also proposed that everyone in the room starts submitting entries about notable women to Wikipedia to make sure that women’s history doesn’t go unrepresented.

Everyone is urged to keep the discussions going after they leave today - the hubbub as people leave the room suggests there's going to no problem doing that.

To close the event, we have more great news. Johnson & Johnson has announced support for a new Theirworld Code Club in Tanzania, which will launch today.

We'll have more news about this on the Theirworld website in the next day or two.

Thanks for joining our live blog coverage of the #RewritingTheCode International Women's Day Breakfast. We'll be adding more updates, interviews and pictures throughout the day. 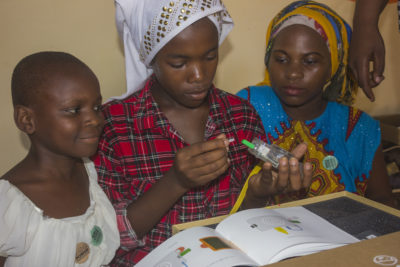 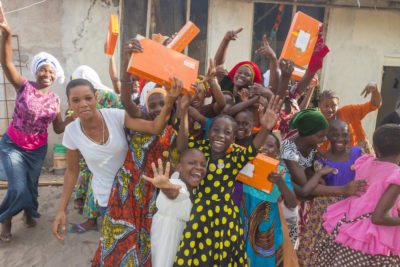 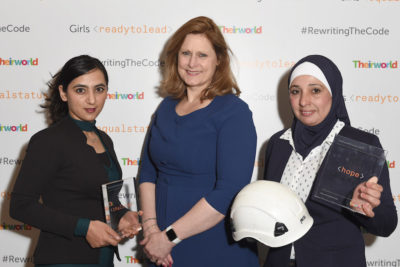 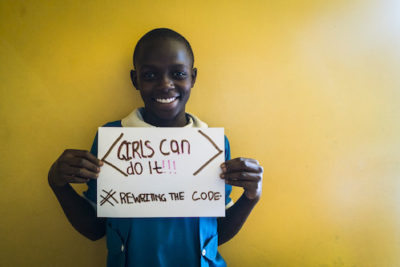