Theirworld's projects in Turkey aim to identify cost-effective interventions to support Syrian refugees in overcoming the economic, cultural and language barriers that prevent them from getting an education.

The big picture in Turkey

Turkey is home to 2.7 million refugees, over half of them are children and more than 60% of them are out of school. Many children have taken up low-wage factory jobs to support their families or been pushed into child marriage to relieve the family of another mouth to feed.

That is why we are piloting low-cost interventions in Turkey. If scaled up, they have the potential to significantly improve learning outcomes for Syrian refugee children whose families have moved there.

The double-shift school system in Turkey

The 'double-shift' school system was introduced, allowing Syrian children to be taught in the afternoons and evenings in existing Turkish school buildings. This innovative approach throws open the school doors to hundreds of thousands of children without the additional costs of new buildings.

But more support is needed to tackle the following issues:

Theirworld worked with stakeholders to establish demonstration projects to address these critical barriers in cost-effective ways that could be aligned with local and national education infrastructure, so to be taken to scale. We chose two partners to do this.

Theirworld worked with IBC on a project that addresses the language barrier in a cost-effective way. Working with the local municipalities and existing education facilities in the local public school system infrastructure, the project aimed to:

The project was to be primarily based in Bagcilar district and enrolled 1300 young people (age 14 - 19).    Of the participants, 85% of students completed the course, and passed the necessary exam to receive a TOMER language qualification certificate.

Many refugee children mainstreamed into the government schools are traumatised by their experiences as refugees, holding back their learning potential, resulting in classroom behavior issues and dropping out of school. The teaching personnel were not equipped to address these needs and manage the classrooms. With a local organisation, the Maya Foundation, Theirworld piloted a Trauma Informed Teaching initiative which provided additional training to teachers about how to manage classrooms and provide support to these students.

The aims of the project was to reduce trauma symptoms of Syrian children attending school who had experienced events such as war, loss and immigration so to increase a child’s cognitive readiness to be educated by enhancing their emotion regulation skills, develop their coping skills and promote solution-based and proactive behaviours instead of resorting to violent behaviours.

To do this, the Maya Foundation worked with the educational authorities to transform the school environment into traumatized child- friendly spaces by training school staff (teachers, administers, employees) in child protection policy, positive discipline methods, and ways to support traumatised children

In recognition of the project’s impact, the Ministry of National Education has agreed to extend the project to nine additional provinces, an encouraging signal for other governments, donor agencies and implementation partners to take into consideration for further scaling up of these efforts inside Turkey and in other refugee contexts. As of 2019, the program is under consideration by the Ministry of Education for national endorsement due to its effectiveness. 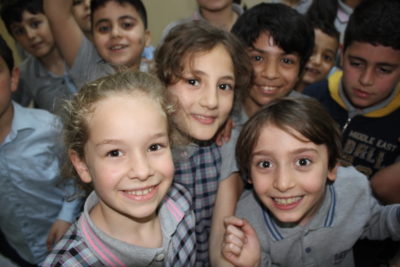