Ahead of International Day for the Elimination of Violence Against Women, we focus on the dangers for girls and efforts to protect them.

Violence against girls and women can take many forms. From abuse at home to attacks at school. From sexual violence to forced child marriage.

The deadliest countries in the world for girls include Syria, Iraq, Afghanistan and Honduras, according to a new report. Hundreds of adolescent girls have also been murdered in Guatemala, South Sudan, El Salvador and Central African Republic.

Ahead of International Day for the Elimination of Violence Against Women on November 25, UNICEF produced a study that highlighted extreme violence against girls in many parts of the world.

"The harm inflicted on children around the world is truly worrying,” said UNICEF Chief of Child Protection Cornelius Williams.

“Babies slapped in the face; girls and boys forced into sexual acts; adolescents murdered in their communities – violence against children spares no one and knows no boundaries.”

The report by the United Nation children's agency - A Familiar Face: Violence in the lives of children and adolescents - also revealed there were close to 500 attacks, or threats of attacks, on schools in 18 nations during 2016.

It spotlighted 10 nations with the highest mortality rate due to murder and violence against girls aged 10 to 19 during 2015. Syria had the highest rate with 225 female deaths per 100,000 followed by Iraq with 89, Afghanistan 35 and Honduras 31.

The report used the most current data to shed light on four specific forms of violence:

UNICEF revealed that worldwide around 15 million adolescent girls aged 15 to 19 have experienced “forced sex” - nine million of them in the past year.

Last year the agency supported action by governments, civil society, the private sector and others to prevent and respond to the sexual abuse of children in 88 countries. Part of that response has been to increase children’s access to  medical and psychosocial support, legal aid and protection.

The International Day for the Elimination of Violence against Women was established by the UN in 1999 to raise awareness of the issue.

Among the many organisations highlighting violence against girls and women this week are Plan International UK and Save the Children.

Plan International UK said its current focus is on violence against girls in the Lake Chad region and Bangladesh, where more than 600,000 Rohingya have fled from neighbouring Myanmar.

There the charity is helping refugees in makeshift camps, including many children who are out of school.

In the chaos, adolescent girls are experiencing sexual violence and harassment, become pregnant too young, forced to leave school and trafficked or forced into early marriage.

Plan International UK said: “More than 604,000 Rohingya people, the majority of them children and women, have fled violence in Myanmar’s Rakhine State since August and arrived in Bangladesh’s Cox’s Bazar, where they are living in makeshift settlements.

“Many children are left on their own during the day as adult member of their family are busy trying to access relief. There is no electricity in the makeshift or spontaneous areas adding to the vulnerability of girls and small children after sunset.

"Humanitarian agencies are starting to set up child-friendly spaces, where children can learn and play together safely, as currently there is no formal education in the camps.”

Regarding problems in Lake Chad, Plan International UK described the situation as the “world’s largely overlooked crisis”. The region straddles Nigeria, Cameroon, Niger and Chad - and the crisis has resulted in one of Africa’s largest displacements, with 17 million people in need of humanitarian assistance.

A spokesperson for the NGO said: “It has resulted in the displacement of more than 2.3 million people, half of them are children. Plan International is particularly concerned about the impact of the emergency on girls, who often suffer the worst consequences during disaster situations.

“In the chaos, adolescent girls are experiencing sexual violence and harassment, become pregnant too young, forced to leave school and trafficked or forced into early marriage."

Plan is working to enable women and adolescent girls to generate income by organising apprenticeships and training in trades. It is also supporting children who have dropped out of school due to insurgency to return to education.

Halima - a teacher at a primary school in northeast Nigeria - is one of those being helped by Plan International UK. She has taught there for nine years and seen Maiduguri, where the school is located, descend from a bustling lively town to a place of fear and tension.

At the height of Boko Haram's insurgency, schools were frequently attacked and forced to close for two years. Halima has developed new skills by attending teacher training, focussed on positive discipline and psychosocial skills.

She said: “I hope my school can provide children with a safe space where they can forget about unsettling events in their past. I hope to provide my students with a brighter future and offer them an opportunity to realise their dreams."

Save the Children said its recent focus surrounding violence against girls has been on child marriage. Thousands of girls are married every day below the legal minimum age.

Kirsty McNeill, Save the Children's Executive Director of Policy, Advocacy and Campaigns, said: “We will not see a world where girls and boys have the same opportunities to succeed in life until we eradicate child marriage.

"When a girl gets married too young, her role as a wife and a mother takes over. She is more likely to leave school, she may become pregnant and suffer abuse.

“Laws banning the practice are an important first step. But millions of vulnerable girls will continue to be at risk unless child marriage is tackled head on. We need to change attitudes in communities so that we can end this harmful practice once and for all." 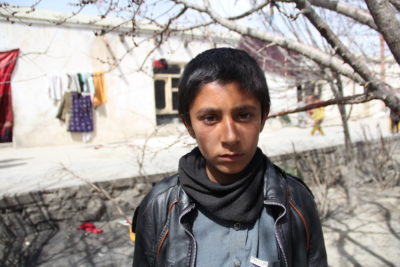