Children are particularly vulnerable in times of conflict. Here we look at the global issue of the recruitment and use of child soldiers and what is being done to tackle the problem.

↑What is a child soldier?

Any girl or boy below the age of 18 who is recruited or used by an armed force or armed group, in any capacity.

A child soldier is not just someone who is involved in fighting. They can also be those in other roles such as cooks, porters, messengers, human shields, spies, suicide bombers or those used for sexual exploitation. It includes children recruited and trained for military purposes, but not used in war.

Children are recruited all over the world by state armed forces and armed groups outside government control.

Non-state armed groups are more likely than states to use children in armed conflict. This makes the problem more difficult to tackle as these groups are less visible and harder to negotiate with.

↑Why do children become child soldiers?

Children become soldiers in different ways. Some are forcibly recruited. They may be abducted, threatened or coerced into joining, while others are enticed with money, drugs or in other ways.

In many cases, children choose to join as a result of economic or social pressures. Others join armed forces to fight for a cause that they or their family support, often with little clear understanding of the implications of their decision.

Being poor, displaced, separated from their families or living in a combat zone can make children particularly vulnerable to being recruited.

Armed groups target children for several reasons. They are easier to manipulate, they don’t need much food and they don’t have a highly developed sense of danger.

↑What happens to child soldiers?

Some children will be trained for and participate in armed combat, while others will be given a supporting role. In almost all cases child soldiers will not have access to formal education.

A number of former child combatants from the Central African Republic have reported that they were forced to perform horrific acts, such as killing their own parents as a form of initiation into the armed group. It is thought that this initiation hardens them to brutality and breaks the bonds with their community, making it difficult to return.

↑How many child soldiers are there?

There are an estimated 250,000 child soldiers in the world today in at least 20 countries.

About 40% of child soldiers are girls, who are often used as sex slaves and taken as "wives" by male fighters.

↑Where are child soldiers recruited?

The UN Secretary-General's annual "name and shame" list for 2017 highlighted the armed forces of Afghanistan, Myanmar, Somalia, South Sudan, Sudan, Syria and Yemen for recruiting and using under-18s for armed conflict. But non-state armed groups also recruit children in these and other countries.

The report said there were at least 4000 verified violations by government forces and over 11,500 by non-state armed groups in the 20 country situations it examined.

↑What’s being done to end the practice of recruiting child soldiers?

In the past two decades, thousands of boys and girls have been freed as a result of action plans mandated by the United Nations Security Council.

Launched in March 2014, the campaign Children, Not Soldiers is working to galvanise support to end and prevent recruitment of children by national security forces in conflict. It is particularly focused on Afghanistan, Chad, the Democratic Republic of the Congo, Myanmar, Somalia, South Sudan, Sudan and Yemen, all of which have signed UN Action Plans.

The UN Secretary-General's 2017 report on children and armed conflict said there had been several positive moves. That included armed groups in the Democratic Republic of the Congo and in the Philippines being delisted and the signing of a peace agreement in Colombia that included a special agreement on the release and reintegration of children.

Efforts are being made to support the release of children in these countries to civilian life and to help reintegrate them, as well as plans to prevent future recruitment of children.

Measures are being taken around the world to prevent children becoming soldiers in the future. It is important to establish and enforce 18 as the minimum age for recruitment.

The majority of states have already done this and many non-state groups have done so too. International political efforts continue to encourage all groups to do likewise.

↑How can child soldiers be helped?

Many child soldiers end up desensitised to violence, which can psychologically damage them. Many are traumatised by what they have been forced to do or have witnessed. Children need to undergo reintegration programmes to help them return to civilian life.

Girls face the additional difficulty of social stigma attached to the belief they have been engaged in sexual activity.

Most child soldiers have missed out on school and need additional education in order to feed themselves and make a more stable life for themselves.

There are various organisations such as War Child and Child Soldiers International who are dedicated to tackling the problem through campaigning and raising awareness, as well as rescuing and rehabilitating child soldiers. 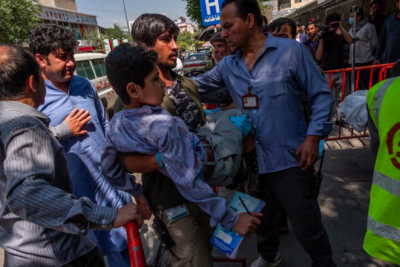