↑What are the global issues around safe pregnancy and childbirth?

Since 1990 far fewer women have been dying during pregnancy or as a result of childbirth. Globally the rate fell by 44% over the past 20 years. However, the gap between those from the wealthiest and the poorest countries is still far too large, with the odds stacked against those in the developing world.

The World Health Organization says that in 2015, an estimated 300,000 women died from complications related to pregnancy or childbirth. For every woman who dies in childbirth, dozens more suffer injury, infection or disease.

In 2015, an estimated one million children died on the day they were born. In the same year, of all of the deaths of children under the age of five, 45% were in the first 28 days of life, 5% more than in 2000. The same year saw 2.6 million estimated stillbirths.

Babies born in sub-Saharan Africa are 12 times more likely to die before their fifth birthday than children born in high-income countries.

It is unfair that a child is less likely to survive and live a healthy life simply because of the circumstances of their birth and the early years of their lives. It also violates that child’s rights to life and health.
Sustainable progress for today’s children, wherever they are born, means every child should have a fair chance. That means ensuring safe pregnancy and childbirth for all, no matter what circumstances they are in.

↑Why is it important to highlight the issue of safe pregnancy and childbirth?

Pregnancy complications, such as premature birth, poor growth and some conditions suffered by mothers, are associated with infant and child mortality as well as problems with brain development. This can cause long-term difficulties as those babies grow and fail to fulfil their potential in education and employment. Also, about 20% of cases of stunted growth start in the womb.

Too many women and their babies are dying from preventable conditions around the world. In 2015, around 800 girls and women died every day as a result of pregnancy and child birth-related complications. These deaths were concentrated in sub-Saharan Africa where access to good antenatal care and skilled birth attendants is low. Women there face a one in 36 risk of dying during pregnancy or as a result of childbirth, compared to one in 3300 in high-income countries.

↑Pregnancy and childbirth in times of crisis

In countries affected by conflict and humanitarian emergencies, damage to health systems threaten the lives of babies and their mothers.

Syria, for example, had made impressive progress in reducing death rates for children under five before the current conflict. Since 1990, the rate fell from 37 to 13 deaths per 1000 live births. Since 2012, however, the under-five death rate has been estimated to include one or two deaths per 1000 live births that can be attributed to the conflict.

Destruction of the health-care system and a lack of medical staff, equipment and medicines have damaged access to health services for pregnant women and newborns. This leads to a large increase in unassisted births in a country where, in 2009, 96% of deliveries had skilled attendants.

↑What needs to be done about the issue of providing for safe pregnancy and childbirth worldwide?

Skilled birth attendants and antenatal care for all women are essential for eliminating preventable maternal death and infant deaths. Children whose mothers die are much more likely to die themselves before their fifth birthday.

The world as a whole has got better at this, with 71% of women delivering with the support of a skilled birth attendant in 2014, compared to 59% in 1990. But progress has not been fast enough, particularly not for poorer women.

Women in well-off nations are three times as likely to deliver with the help of a skilled attendant than women in the poorest countries. This gap has not changed in the past 15 years

Many newborn illnesses and deaths can also be prevented with simple, cheap interventions during delivery and the days after birth. Regular visits by community health workers can make a huge difference in preventing complications and death.

Straightforward but life-saving interventions include drying the newborn and keeping them warm, skin-to-skin contact, delayed cord clamping, breastfeeding as soon as possible, special care for low birth weight babies and treating conditions such as asphyxia and sepsis.

It is necessary for governments to keep focused on disadvantaged children and their mothers as they work toward increasing maternal and newborn survival and health.

As well as providing access to skilled personnel, there needs to be more work done in joining up care, with better referral mechanisms and stronger links between health facilities and the community.

Women and their families must be empowered to seek care and education about pregnancy, delivery and child health. If they are aware of good practice and danger signs, many dangers can be avoided.

Women also need the chance to manage their reproductive health which can include access to contraception. Reducing the number of unintended pregnancies could prevent 60% of maternal deaths.

Globally, 15 million children are born at less than 37 weeks of pregnancy each year and this number is rising. Preterm birth is the single biggest cause of death and disability among babies. It causes poor brain development in childhood, which has an impact on a child’s ability to achieve their full potential in life.

A better understanding of what happens to the brain during preterm birth and other pregnancy complications is important to reduce this devastating effect, both by knowing the triggers for preterm birth and in developing therapies.

The Theirworld Edinburgh Birth Cohort is a £1.5 million study in Scotland that will track 400 children from birth to adulthood. It aims to find new ways to prevent and treat brain injury in babies.

Launching the initiative in 2015, Theirworld President Sarah Brown said: “This is a unique project which will help give babies the chance of the best start in life and Theirworld is proud to fund it.”

The Edinburgh Birth Cohort team will work to identify the causes and long-term consequences of brain injury at birth. They also hope to speed the development of new treatments that could improve the health of premature babies. 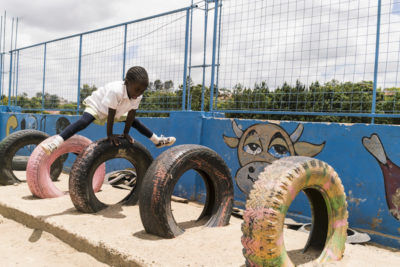