Children born into extreme poverty, war zones and who have to "grow up" too quickly are at a distinct disadvantage when it comes to fulfilling their potential in later life.

Where you are born and the start you get will define how you will live your life. In almost all cases.

The better start in life you have, the greater chance you have of fulfilling your potential.

So when it comes to the developing world, children born into extreme poverty, war zones and who have to "grow up" too quickly are at a distinct disadvantage.

For instance, many girls born in low-income countries are more likely be married as a child, end up being a pregnant adolescent and having children of their own who will be as disadvantaged as their teenage mother. And so the cycle continues.

It’s estimated that around 250 million children under five are currently prevented from reaching their full potential by poverty, insufficient nutrition and health services.

This is why Theirworld launched their #5for5 campaign to raise awareness of early childhood development and put pressure on world leaders to take urgent action to make sure all children have access to nutrition, health, learning, play and protection.

UNICEF estimates that unless early years provision accelerates, by 2030 almost 70 million children may die before the age of five - with children in sub-Saharan Africa 10 times more likely to die before their fifth birthday than children from high-income countries.

Jim Kim, President of the World Bank, said: “Providing early childhood development is both morally right and economically smart. Without it, inequality starts at birth, meaning children risk lifelong cognitive deficits through no fault of their own.”

Because the first few years of a child’s life determines their health, their chances of doing well at school and even how much money they will earn as an adult, the Education Commission is calling for every country in the world to provide two years of free, quality pre-schooling to every child.

The report published in September by the influential group of world leaders and experts said nations must prioritise early childhood development and preschool to ensure the building blocks are in place for children to succeed in their education and beyond.

By the age of three, 80% of brain development has already happened. A combination of good health, nutrition, stimulation, early learning, education, family care and protection can help a child to develop physically, mentally and socially.

That happens most of the time in the world’s high-income countries, where 87% of children go to preschool. But in low-income countries it is only 23%. Despite expected improvements, that is projected to rise only to 42% by 2030 and 54% by 2040.

The Education Commission says its Learning Generation pathway - a radical plan to give every child the same education opportunities - will see those numbers jump to 89% by 2030 and 99% by 2040.

Anthony Lake, Chief Executive of the United Nations children's agency UNICEF, said: "Investing from the earliest days of a child’s life is critical to the development of the brain. It is a once in a lifetime chance to build the future of a child - no stage in a child’s life is more important."

Countries such as Jamaica have addressed this by setting up a single governing body for ECD, comprising representatives from across relevant government ministries with responsibility and oversight for defining ECD strategies, resource allocation, and coordinating activities.

In Vietnam, the focus on education has been stepped up regarding the quality of teacher training, increasing teacher wages (average salary $18 per month), and providing better facilities and materials. Holistic child development and quality educational resources are being implemented in some educational institutions.

They also want to implement a compulsory one year of preschool education prior to attending the first year of primary education (six years of age).

Vietnam plans to increase the accessibility and level of education of many children, (many parents have little or no formal education), along with information for families about the suitable care and education for their children.

Sue Gerhardt, a British psychoanalytic psychotherapist and author of Why Love Matters, said: “The year or two after birth is a special period in human development. It is a time when all sorts of biological systems are connecting up and when the brain is making neural pathways that guide future reactions to life.

“Systems like the immune system, the stress response, the serotonin system, the oxytocin system and the pre-frontal areas of the brain are all getting set up.

"Human babies are born with many systems unfinished, for a reason. It makes us humans uniquely adaptable. We adjust our systems to fit in with the world around us. While they are being established, they are very open to experience.

“Parents who are tuned in to their babies’ and toddlers’ emotional states help the child to become aware of them. With adult help, they slowly learn how to manage their own feelings and to reflect on them.

“These experiences are written into the brain. Children who grow up lacking these qualities of being able to pay attention and to have self-control are disadvantaged. They are less able to learn in school. They are less employable.”

Research also suggests that because many wealthier families are "home schooling" their children in the early years, by the age of six these children have spent as much as 1300 more hours in enriching activities than those of poorer families. Poorer parents are strapped for money and time - roughly 35% of children in the United States live in single-parent homes.

With adult help, they slowly learn how to manage their own feelings and to reflect on them

In Zambia, living in one of the country’s poorest households lowers the probability of accessing early childhood care by a factor of 12 compared with a child in the wealthiest households, a number which rises to a factor of 26 in Uganda and 28 in Egypt.

Gaps in cognitive and language development can be seen in children as early as four months and tend to worsen as time goes on.

Research from five countries in Latin America finds large wealth gaps on standardised test scores for language development. The gaps are evident by the age of three and there is no evidence of catch-up once children enter school.

UNICEF’s 2016 State of the World’s Children Report could not say it more clearly: "Inequity imperils millions of children and threatens the future of the world."

Developmental differences between those children who have what they need for healthy brains and bodies and those who do not can show up as early as nine months old.

Ray Chambers, the UN Special Envoy for Health in Agenda 2030 and for Malaria, said:” There is no greater need than securing a safer and healthier future for our children. Early investments add up to the best possible start in life.” 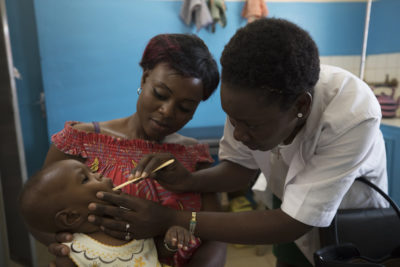 $1bn to improve health and nutrition of the world's poorest children