World leaders must ensure the target of quality early childhood development, care and pre-primary education for every child is achieved.

Education and nurturing care should be a birth right - but sadly it's not the case for hundreds of millions of children around the world.

The more resources that are put into early childhood development and pre-primary education, the better chance a child has to develop and fulfil their potential in later life.

That message of hope was enshrined in the Sustainable Development Goals - a set of global targets agreed by world leaders to be achieved by 2030.

One of those targets is to ensure that every child will "have access to quality early childhood development, care and pre-primary education".

But these are more than just targets. They are promises made to children about getting the best start in life.

That's why the children's charity Theirworld has launched the #5for5 campaign to put pressure on world leaders to take urgent action to make sure all children, especially the poorest and most marginalised, have access to the full range of nurturing care.

An influential report last month warned that hundreds of millions of children will be robbed of their future unless immediate action is taken to deliver the care children need in the vital first five years of life - when a child’s brain is 90% developed.

The Education Commission - a high-powered group of world leaders and experts - unveiled a bold plan called the Learning Generation at the United Nations after a year of research and investigation. It aims to give a quality primary and secondary education to every girl and boy in every country.

But that pathway to a bright future begins well before primary school.

“World leaders must keep their promise to get every girl and boy in the world into school. In order to meet that promise efforts must begin long before a child enters the classroom," said Strive Masiyiwa, Chairman of Econet Wireless and a founding member of the Global Business Coalition for Education.

“Childhood education should not be a privilege but a birth right for everyone."

By the age of three, 80% of a child’s brain has developed. By five, it is 90%. Good nutrition, early education, family care and protection can help a child to develop physically, mentally and socially.

But in low-income countries only 23% of children are being reached at this age. Despite expected improvements, that is projected to rise only to 42% by 2030 and 54% by 2040.

The Education Commission says its Learning Generation plan will see those numbers jump to 89% by 2030 and 99% by 2040.

It said its proposed measures will increase the number of qualified high school graduates in low and middle-income countries from 400 million to 850 million by 2030 and to 1.2 billion by 2040.

The numbers in the lowest income countries will rise from just eight million to 80 million.

Sarah Brown, President of Theirworld, said: “Less than half of all children around the world aren’t getting any education in their early years, an intervention proven to be a key investment in a child’s development.

"New research shows us that children are missing out on education and learning at a crucial young age, putting them at a disadvantage before they have even set foot in a primary school.

“If we are serious about achieving the Sustainable Development Goals and giving every child the best start in life, we must do more to make sure that every child - no matter who they are or where they were born - receives these critical interventions in the early years.”

That message has been echoed by singer and campaigner Shakira. She has urged global leaders to invest heavily in early childhood development in the wake of new science that is creating a shift in our understanding of the lasting effects of deprivation and stress on young children.

She said: "More than 100 million children are out of school and 159 million boys and girls under five are physically and cognitively stunted due to a lack of care and proper nutrition.

“Every year that passes without us making significant investment in early childhood development and initiatives that address these issues, millions of kids will be born into the same cycle of poverty and lack of opportunity.”

A scorecard published by Theirworld in August looked at nutrition and early childhood development in 20 countries in East and Southern Africa. It found many of the world's poorest children are being left behind because of factors like growth and inadequate childcare in their early years.

This varies hugely in East and Southern Africa - from 4% in the Democratic Republic of the Congo and 6% in South Sudan to 79% in Angola and 93% in South Africa.

The average pre-primary attendance across 17 countries with data is just 34%. Of those countries, 12 show little or no progress over 10 years, or are getting worse

And with just 17% of children in low-income countries enrolled in pre-primary education, funds are not being directed to where they would have the greatest impact. 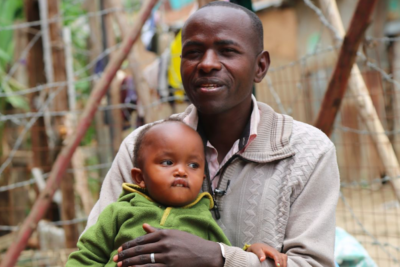