Turkey - home to a huge number of refugee children - is preparing to reopen its schools, while flooding in Syria has further damaged an ailing education system.

Shot in the arm for Turkish education

Teachers in Turkey will be vaccinated as they prepare for a gradual reopening of schools from March 1. Education Minister Ziya Selcuk said all preschools will reopen full-time on February 15, while other grades will begin to go back two weeks later.

Primary students will attend class twice a week, while students in grades 8 and 12 - who are studying for high school and university exams - will attend full-time. Turkey hosts the biggest number of refugees in the world and has about 650,000 refugee children in its school system.

Austria said it will reopen schools on Monday as it loosens its Covid-19 lockdown. Tests will be carried out in schools and older pupils' classes will be split into separate groups.

Denmark, in a tough lockdown since December, will reopen schools for children in grades 1 to 4 starting on Monday. Primary schools in the Netherlands, which have been closed since mid-December, will also restart on Monday.

England will only allow schools to reopen on March 8 at the earliest because of the risk of another spike in coronavirus infections if measures are relaxed too quickly, Prime Minister Boris Johnson said.

Nearly seven years after Islamist militants kidnapped two of his daughters from their school in Nigeria, a phone call last week let Ali Maiyanga know that his family's ordeal might soon be over.

It was from Maiyanga's daughter Halima, who - along with her sister Maryam - was among more than 200 schoolgirls snatched by Boko Haram insurgents in Chibok in 2014.

Halima, 23, told him she had been rescued by the Nigerian army but Maiyanga said he did not know her exact whereabouts or if she was with other former classmates. There has been no news since and the government has not issued a statement.

"I was crying, she was crying," said Maiyanga, who was reunited with Maryam in 2016. About half of the students who were abducted have escaped or been released.

More than 21,000 children and almost 1,000 teachers and education staff have been affected by flooding in Syria that has reportedly damaged or destroyed nearly 120 schools.

But the situation could turn out to be even worse, with many areas still inaccessible after severe winter storms. At least $1 million is needed to help the response, said the Education Cluster of UN agencies and NGOs in northwest Syria.

The floods are the latest shock to the education system. More than two million children are already out of school in the region because of the conflict, lack of funding and Covid-19 measures.

Most education facilities are not equipped to provide protection and social distancing, and thousands of teachers have not been paid for more than a year. The education cluster and partners said they need extra support such as psychosocial support for children, urgent rehabilitation of learning spaces, and stationery and textbooks.

The Education Cannot Wait fund has given a $1 million emergency response allocation to Mozambique, where a growing humanitarian crisis has disrupted education for 75,000 children.

Violence and insecurity in Cabo Delgado province have resulted in more than 170 schools attacked, 45 schools destroyed and six teachers killed in the past three years.

“Amidst insecurity, forced displacement and Covid-19, education means not only means safety, protection and a sense of normalcy for these crisis-affected girls and boys, it also means the possibility for a brighter tomorrow,” said ECW Director Yasmine Sherif.

More than half a million children are at risk of child labour and child marriage as their families struggle six months on from the Beirut blast, World Vision has warned.

The explosion, which killed more than 200 people in August, compounded a crisis in Lebanon which had already been exacerbated by Covid-19.

In Beirut schools are closed, many health facilities are inaccessible, running water is scarce and many people cannot work due to lockdown. World Vision estimates 541,000 children are at risk of early marriage and being forced into labour as parents struggle to put food on the table.

Hans Bederski, World Vision Lebanon’s Country Director, said: "Covid-19 has left parents with no work and their children with no access to education and at risk of forced labour and marriage. It is almost impossible for people in Lebanon to overcome this dire situation on their own.” 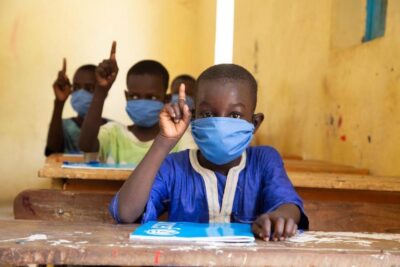