A shocking stat about the world's poorest girls, education chaos caused by a volcano and learning through play - they're all in our news roundup.

Nearly one in three adolescent girls from the world's poorest households have never been to school, a shocking new report has revealed. They face obstacles such as poverty, gender discrimination, disability, ethnic origin or teaching language, distance from schools and poor infrastructure.

“As long as public education spending is disproportionately skewed towards children from the richest households, the poorest will have little hope of escaping poverty, learning the skills they need to compete and succeed in today’s world, and contributing to their countries’ economies,” said UNICEF Executive Director Henrietta Fore.

Volcano forces 600,000 children out of school

Nearly 600,000 children from more than 1,000 schools have been missing out on classes for two weeks after a volcano erupted in the Philippines.

Many classrooms are damaged and buried under hazardous ash in towns that have been abandoned - and over 300 schools are being used as evacuation centres. This means students could fall behind and miss graduation in three months, Save the Children has warned.

Half a million people have been made homeless by the Taal volcano eruption and it is feared they may not be ABLE to return to their towns and villages for many months.

“The emotional and psychosocial stress of being made suddenly homeless and surrounded by so many strangers in such close proximity are taking a toll on children," said Jerome Balinton, humanitarian manager for Save the Children Philippines. "This means setting up temporary schools so children can return to a normal routine while they wait for the fury of the volcano to subside.”

US$112 million from GPE will help Tanzania get more of its children in school and learning ⟶ https://t.co/JAordrUtgt pic.twitter.com/HyDIx8assx

A $112 million grant will build on Tanzania’s successful efforts to get more children in school and learning – especially girls and children from disadvantaged backgrounds.

Between 2017 and 2018, basic education enrolment increased by 8.5% and the likelihood that a child entering primary school will complete the full cycle of primary and lower secondary doubled from 24% to 48%.

The Global Partnership for Education's new grant will improve the quality of pre-primary, primary and non-formal education by strengthening teacher training and professional development, distributing more quality teaching and learning materials to underserved areas and improving education planning and management.

“We have received this news with a lot of enthusiasm, giving us all the reasons to work even harder for the children of Tanzania. The previous GPE grant, which concluded in June, was instrumental in supporting learning activities in the lower levels of primary education,” said Dr Leonard Akwilapo, Permanent Secretary of the Ministry of Education, Science and Technology.

Five children were killed when Syrian forces launched a ballistic missile at a school, Human Rights Watch has reported.

More details have now emerged on the January 1 attack in Idlib. The children who died were aged six to 13. Nine civilians were killed on the day but three more have since died of their wounds - including a teacher whose son was also a victim.

Human Rights Watch said the missile which struck Abdo Salama School in the town of Sarmin was armed with a banned cluster munition warhead.

“After years of killing and maiming children in brutal attacks, the Syrian government starts the new decade by using a banned weapon to kill more children and their teachers,” said Lama Fakih, Crisis and Conflict director at Human Rights Watch. “The Syrian government should cease its repugnant use of cluster munitions and attacks on schools and hold accountable the officials who authorised it.”

Five million children aged six to 12 will benefit from global partnerships to support primary school teachers’ use of learning through play.

The LEGO Foundation has announced partnerships with the Aga Khan Foundation, BRAC, Right To Play, UNICEF, VVOB  and RTI International. Each organisation will integrate Learning through Play methods into the development of primary school teachers in Kenya, Bangladesh, Ghana, Rwanda and Vietnam.

The partnerships will support 190,000 teachers, as well as three million parents and community stakeholders.

“The LEGO Foundation is committed to working with teachers and education systems in using the transformative power of play to improve learning for millions of children all over the world,” said Sarah Bouchie, Head of Global Programmes at the LEGO Foundation. 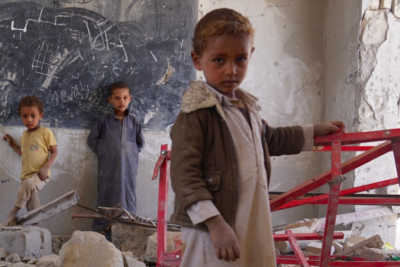