Theirworld's campaign to give every child the best start in life has been spotlighted in a World's To-do List launched by some of the biggest global brands.

The companies - including Unilever, Google, Mars, Diageo and DPDgroup - are working with the non-profit agency Project Everyone to support the United Nations' Sustainable Development Goals. Each of the 17 goals has been turned into a "sticky note" and each has an action for people to take.

The action for SDG4 - the goal of quality education for all - is to support Theirworld's call for donor organisations and governments around the world to invest at least 10% of their education aid budgets in pre-primary education.

Theirworld has led the way by urging donors to push more of their funding into early years learning, to ensure young children get the foundation they need to succeed at school and beyond.

It is hoped that the companies and organisations supporting the World’s To-do List - which have more than 700,000 employees and a combined social media reach of over 100 million - will raise awareness of the SDGs and take actions to help achieve them.

$138m funding for education in emergencies

Education Cannot Wait (ECW), the global fund for education in emergencies, has announced that donors have pledged $138 million in new funding to help provide schooling for vulnerable and marginalised children.

The new funding will accelerate the impact of ECW’s investments, which have already provided education for more than 4.6 million crisis-affected children and adolescents. Its Covid-19 rapid responses have also reached a further 29.2 million children.

“This new round of funding is a bold and important step in reaching the world’s most marginalised children and adolescents with the power of inclusive quality education,” said ECW Director Yasmine Sherif. “It shows the commitment of our strategic donors to scale up their generous support."

UNHCR’s 2021 #NansenAward Winner is the incredible Yemeni organization Jeel Albena seeking sustainable solutions for the displaced Yemenis. It is a lifeline for thousands of people. Its motto is: "From Yemenis, for Yemenis!" 👏👏👏 pic.twitter.com/F9x7FTC8P8

A Yemeni humanitarian organisation that renovates schools as part of its work with people displaced by conflict is the winner of the 2021 UNHCR Nansen Refugee Award.

The Jeel Albena Association for Humanitarian Development (JAAHD), founded in 2017, has provided jobs and 18,000 emergency shelters in Hudaydah and Hajjah provinces.

Founder Ameen Jubran said: “The areas where we work are considered to be among the most impoverished and also the most dangerous. Despite that, we had displaced people and others who needed our help. We couldn’t just leave them behind.”

Turkey's government has said it will "never" close schools again despite a rise in Covid-19 infections. It is considering various methods - including weekend lessons - to continue in-person education.

Since schools reopened for in-person classes last month, a quarter of the almost 30,000 cases per day have been among under-17s, said Health Minister Fahrettin Koca.

But he added: "I have said that we will keep schools open this year under any circumstances. It's not about being the last to close - they should never close."

Turkey is host to 1.7 million Syrian refugee children but about 400,000 are out of school, according to UN figures.

Ten more students who were kidnapped by gunmen from a school in Nigeria two months ago have been released after a ransom was paid.

About 150 students were taken in a raid on the school in Kaduna state in the northwest of the country - the 10th mass school kidnapping since December.

The bandits have been releasing the students in batches after getting ransom payments. An official at the Bethel Baptist High School said 11 students remained in captivity and it was working to ensure they were freed soon.

Kidnappings at schools in Nigeria were first carried out by jihadist group Boko Haram and later its offshoot Islamic State West Africa Province. But the tactic has been adopted by other gangs seeking ransom money. 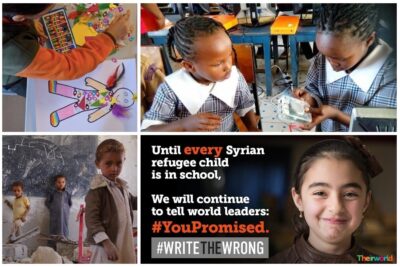 Safe schools, Code Clubs and early learning: a look at Theirworld's work in the first half of 2019