Children affected by conflict appeal for education to be protected - plus it's back to school at last for millions of children in Venezuela.

Children from countries where education has been affected by conflict have called for urgent action to protect schools from attack and military use.

At the Fourth International Conference on the Safe Schools Declaration in Abuja, Nigeria, they urged all governments to sign up and turn promises into practice.

The Children’s Manifesto call to action was made by young people from Burkina Faso, Guatemala, Yemen, Colombia, Mali, Mexico, Niger, Palestine and Ukraine. It said: "Children are scared - when armies come to schools, arrest children or fire live or rubber bullets at them. Children are scared ... when they hear the sounds of explosions and gunfire."

The Safe Schools Declaration - a commitment by countries to protect students, teachers and schools in conflict - has been signed by 112 nations. But attacks on education and the military use of schools and universities increased by a third globally in 2020.

Nigerian President Muhammadu Buhari told the conference about his own country's issues. He said: "There are more than 12 million children out of school. A generation of children traumatised and afraid of going to school. This remains a challenge we are working to overcome."

A report released by Save the Children during the conference shows that more than 60% of children in Yemen did not return to the classroom last year after their schools came under attack.

Meanwhile, in South Sudan children have delivered a message that schools must be protected from military use to allow them a safe education. They were at the official launch of local guidelineson the Safe Schools Declaration.

The country's education ministry developed the guidelines, to be adopted by the army. Vice President Abdelbagi Ayii said: "This is a milestone in safeguarding our school children and learning institutions."

Donors urged to back education in Afghanistan

Education Cannot Wait, the global fund for education in emergencies, has called for urgent funding to support the future of schooling in Afghanistan.

Director Yasmine Sherif was part of an all-women United Nations mission to the country. In Kabul, where she visited a girls' school, she stressed the importance of increasing access to quality education for all children - especially adolescent girls, who have been shut out of many secondary schools since the Taliban takeover.

Even before that, 4.2 million children were out of school - 60% of them girls. Sherif said: “With our UN and civil society partners, ECW has a proven model of delivering access to quality education in crisis-impacted countries around the world.

"I call on our strategic partners and donors to support ECW and our UN and NGO partners in sustaining and urgently scaling up our programmes for all girls and boys in Afghanistan. Education is their inherent human right and every girl’s right."

Back to school at last in Venezuela

Venezuela has reopened public schools for 8.7 million children after a long shutdown due to the pandemic. But some schools remain closed for repairs or because of lack of staff.

The government has delayed the restart of in-person classes several times during the past year amid new peaks in Covid-19 infections and vaccination delays.

"For us the return to classes is important but we have doubts," said Maria Clemente, an official at the Venezuelan Federation of Teachers, which has 325,000 members. She said some teachers will stay away for fear of getting sick or because of low salaries.

Those aged 12 and over in Venezuela are now eligible for their first dose of a Covid-19 vaccine. The government says 56% of the population have been vaccinated - but the Pan-American Health Organization puts the figure at 21.6%.

Public schools in Delhi have improved so much that 250,000 children have moved to them from private schools this year, according to the city’s chief minister.

Arvind Kejriwal told families: “Providing the best education to your children is the greatest act of patriotism and it will go a long way in making the country great.”

He also said he is determined to ensure children from the marginalised Dalit caste get “the highest quality of education” and urged families not to make children work at the expense of learning.

Kejriwal spoke at a school, where he presented to certificates to Dalit students who scored more than 90% in exams.

Spending time in nature can help the development of very young children, new research has shown.

Parks, community gardens and street trees near a child's home can be very important in their first five years, said researchers at the University of British Columbia.

Access to green spaces can reduce the harmful effects of air pollution and noise that affect children’s health and development through increased stress, sleep disturbances and central nervous system damage. 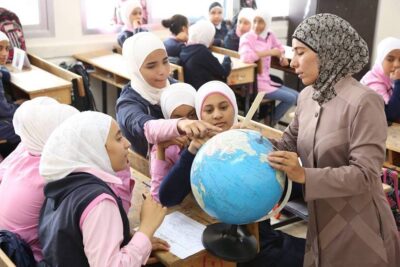