A Theirworld youth advocate talks about the future of learning at a global event - and which countries are reopening or re-closing their schools?

A Global Youth Ambassador for Theirworld told a virtual gathering of global leaders and influencers yesterday that, despite the effects of the Covid-19 pandemic, she is "excited about the future of our generation".

Miranda said: "Remote learning does not replace the need for a safe space for children in a classroom. The unreliability of digital access to education makes it clear that it needs to be supported by offline resources."

But she added: "The opportunity to engage in digital learning makes me feel excited about the future of our generation - and if learners can learn digitally and get connected to all the resources and opportunities that exist, then we will move from just surviving to thriving."

New funding contributions from Germany ($9.5 million), the United States ($5 million) and Norway ($2.2 million) were made during yesterday's event. Including another new contribution last week from the Netherlands ($6.9 million), the total funds mobilised by ECW in just four years of operations now total $650 million. By next year, its investments will reach 8.9 million children and youth annually.

Gordon Brown, the UN Special Envoy for Global Education, opened the event by talking about  the dreadful scenes after fire destroyed most of the Moria refugee camp on the Greek island of Lesvos. He said: "My plea today is to think of every child who is now without hope and who is desolated - and to say that the purpose of education is to give hope, so they can dream again and believe again."

Other speakers included Theirworld Chair Sarah Brown, who spoke about the charity’s education programme on Lesvos and the REACT initiative launched by the Global Business Coalition for Education that matches the resources and skills of companies to educational needs.

She said: “Creative partnerships are more than business. Nurturing the innovative spirit of young people is an important ingredient, finding NGOs that aren’t afraid to roll up their sleeves and step out the traditional box. If we have learned anything in this Covid crisis as individuals, it is to be quite flexible. Each of us have adapted in our day to day, in how we work, how we learn. This is a time in which we can think sideways in our jobs - we are not short of goodwill and good ideas.”

Millions go back to school after shutdowns

Millions of students in Pakistan returned to classes on Tuesday after a break of six months. Senior schools were the first to restart, with middle schools set to go back next week and primary schools the week after.

"Studies have been very badly affected," said Naseem Akhtar, principal of a girls' school in Karachi. "We appreciate the decision of the government to open schools from today."

Education Minister Shafqat Mahmood warned that schools that did not following precautionary measures, including the wearing of masks and social distancing, would be closed again.

After a six-month shutdown, the longest in Europe, Italy reopened most of its schools on Monday. More than a million pupils returned to schools across Portugal the same day, as did 2.8 million children in Romania.

In Zimbabwe, students due to take their final exams began returning to schools from Tuesday. South Sudan also announced that "all the higher institutions of learning and schools should be opened".

Jordan has suspended schools for two weeks from yesterday, as part of renewed restrictions after a record spike in coronavirus cases in the past few days.

Restrictions were lifted in June and two million students went back to school. But infections have jumped since last week to a new peak of more than 200 a day.

The initial lockdown was imposed in late March and eased in May. The new lockdown is scheduled to last three weeks.

1 in 4 countries has not put a date in place for when children will return to the classroom.

Before the pandemic, the world was facing a learning crisis. If we don’t take action now, this crisis will only deepen. @unicefchief https://t.co/BOFzRx6XDF

Half of the world's student population - about 872 million young people in 51 countries - are still unable to go back to their classrooms because of school closures, according to UNICEF Executive Director Henrietta Fore.

She spoke at a press conference held by UNICEF, UNESCO and the World Health Organization to discuss updated guidance on school-related public health measures. Fore said at least 24 million children are projected to drop out of school due to the pandemic.

"That’s why we are urging government to prioritise re-opening schools, when restrictions are lifted," she said. "We’re urging them to look at all the things that children need – learning, protection, physical health, mental health – and ensure the best interest of every child is put first."

WHO, UNICEF and UNESCO have issued updated advice for policymakers and educators on running schools as safely as possible. It looks at risk-based approaches for school operations; age-appropriate considerations for measures such as physical distancing and masks in schools; and other measures to mitigate against Covid-19 in schools.

Child marriage is on the rise in Bangladesh's Rohingya refugee camps and the risk of human trafficking grows with every day the pandemic shuts youth services, according to a UN-led study released yesterday.

Bangladesh scaled back activities in the camps in April and focused mainly on providing health and emergency food to prevent the spread of the novel coronavirus. It also restricted movement of aid workers and refugees.

"Before Covid-19 there was a larger humanitarian footprint and... friendly spaces. Children could talk to facilitators and share their fears with friends. Those avenues are not available to many now," said Kristen Hayes, coordinator of the sector.

Almost half of the 540,000 Rohingya refugee children in Bangladesh under the age of 12 had been missing out on school. Earlier this year the government finally agreed to offer formal education for children up to 14. The first 10,000 were due to start in April until the pandemic struck. 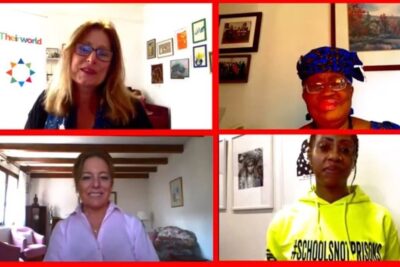