The mirrored room, sited on the main UN Plaza in New York, is filled with what appears to be endless rows of empty school desks - representing the 260 million children who don't go to school.

“Today the world has the largest number of refugees and displaced people since World War II, half of whom are children. We owe them what we want for our own kids - a safe place to learn,” said Sarah Brown, Chair of Theirworld

The Theirworld exhibition was developed by the creative ad agency BBDO MPLS from Minneapolis. Its Executive Creative Director Timothy Mattimore explained: "The idea initially came from a few creative people sitting in a room one night, grappling with the sheer number of children globally who go without an education - as well as the number of kids who will lack basic skills by the year 2030.

"We were just asking ourselves: 'What does 260 million even look like? How can we show that?'

"That led us down multiple paths and presented even more questions, such as "How much space would 260 million pencils take up? How much does that weigh? Can we get a barge in the East River of New York to carry them?'

"In order to make maximum impact at the UN General Assembly, we needed to create something powerful within the confines of the venue. Something that would hit people in the heart with the incredible number of children at risk - but achievable in a small space.

"From there, we began talking about a mirrored room in my parent’s home from my childhood, where you would basically see infinite images of yourself upon entering the room.

"Then the work of Japanese artist Yayoi Kusama [which includes infinity installations] became part of the conversations and the Infinity Classroom was born.

"By creating a mirrored room with only a small amount of school desks, we were able to paint a vivid picture of what the number of children without education looks like and leave viewers with a powerful story to share with the world."

One of the first visitors to the Infinity Classroom was Amina Mohammed, The UN's Deputy Secretary-General. She tweeted this:

Also involved with the project was Nick Eagleton, whose role was to ensure the Infinity Classroom integrated with Theirworld's brand.

The co-founder of UK brand studio Saboteur - who previously worked on the charity's rebranding in 2013 - said: "One goal was to bring the #WriteTheWrong global campaign more closely together with the Theirworld brand through language, identity and communications.

"The result is that the campaign is much more clearly a Theirworld initiative, helping to reinforce Theirworld as the brand behind it. It gives the charity a much more prominent voice through all the campaign executions and communications."

The #WriteTheWrong campaign will be featured at various events around this week's UN General Assembly.

"We are at a crossroads and we must act. It is within our reach to end the global education crisis." 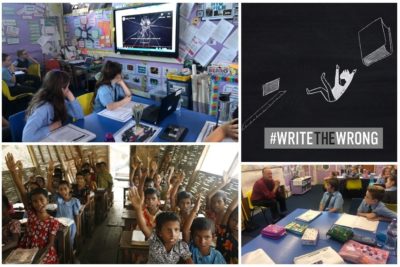 The primary school class that wants to help change the world