Former child refugee Elias Bou Saab talked exclusively to Theirworld President Sarah Brown about the huge challenges of getting Syrian children into Lebanon's schools - and warned about the risks of losing international aid.

It was a daunting task. To get a huge number of Syrian refugees into Lebanon's public school system while continuing to provide a quality education for local children.

But Elias Bou Saab - in his role as Lebanese education minister - tackled the challenge head-on. With a mixture of honesty, innovation and charm, he travelled the world asking for help and oversaw a massively complex school enrollment programme.

More than 200,000 children who fled from the Syrian conflict are now learning in Lebanon's schools, thanks mainly to the double-shift system that sees refugee and local students using the same classrooms at different times of the day.

A new government cabinet was named this week and Bou Saab's term has come to an end after almost three years. He can look back with pride at what has been achieved, aided by international donors, NGOs, United Nations agencies and the Lebanese government.

But the Syrians enrolled in school in Lebanon account for only half of the country's refugee children. Much more has still to be done if every girl and boy is to get an education.

Bou Saab has a warning for world leaders.

“If this aid stops, what is going to happen to these children? Both the Syrian and the Lebanese?" he asked in an exclusive podcast interview with Theirworld President Sarah Brown.

You can listen to the full interview here

“The biggest nightmare would be if the international community decides one day to drop this project. To stop supporting it. Then we will have a total failure not only for the refugees but also for the Lebanese students that are in our education system.”

Bou Saab knows what it feels like as a child to be torn from your home by conflict and end up in another country.

“I myself was a refugee once. I went to Syria after a war in Lebanon," he told Sarah in an episode of her Better Angels podcast series.

"I stayed one entire year without school. I know what it means. I know that in the future we will regret if we had the opportunity to put these children in school and not have an entire lost generation and we did not do it.”

Education and helping young people to fulfil their potential have been themes running through Bou Saab's life. He earned a marketing degree in London, studied international relations at Boston University in the United States and later founded the American University in Dubai.

As a member of the Clinton Global Initiative, he established a scholarship programme to give American students the chance to study in the Middle East.

He was mayor of his home town for three years from 2010 - setting the scene for his move into the national and international spotlight. In February 2014, Bou Saab was appointed Lebanon's Minister of Education and Higher Education.

His most pressing problem was how to integrate the growing number of Syrian refugees into local schools. That meant not just finding classrooms - but also arranging buses, meals, teachers and supplies.

And all that as he went globetrotting to persuade international donors and key influencers that Lebanon could not do this on its own. The willingness was there but the country needed financial help.

“It was a big challenge for me when I took on this post," he told Sarah. "We had 250,000 Lebanese students in the government system schools. At the same time there were 450,000 Syrian students that are refugees and are in Lebanon and require education.

“I immediately thought that we need to look at two things.

“One, how do we improve the quality of the education for the Lebanese students and keep the host community accepting the refugees - because without the acceptance we would not be able to accommodate the refugees into our communities.

It is frustrating - but without what we are doing these children will remain on the street without hope, without education.

“Then take the refugees and put them all in the classrooms because every child deserves the right to have quality education.”

A large chunk of the answer lay in the innovative but simple double-shift school system. In September 2013, a report published by Theirworld's A World at School movement called for international funding to help provide this and other solutions to the crisis.

That was backed up by another Theirworld report last year called Reaching All Children with Education in Lebanon. It praised the work of the Lebanese education ministry but said more financial support was needed from the international community.

That seemed to have arrived in February this year, when the co-hosts of the Supporting Syria and the Region conference in London promised to provide the funding to get one million Syrian refugees into school in Lebanon, Turkey and Jordan.

There has been progress - but not enough. As we approach the anniversary of that pledge, the funding is still well short and hundreds of thousands of refugee children are still out of school.

“It is frustrating - but without what we are doing these children will remain on the street without hope, without education," said Bou Saab.

"They become a big challenge not just for Lebanon and the region but for the international community in the future.

“This is how you get terrorist recruiting, uneducated children. This is how you fear that they are going to towards child labour, early marriage. Everything that you don't want to see in our world.

“For that I feel that it is our obligation to do everything we can and talk to everyone around the globe to say how we can have a better world and how we can tackle this situation and bring in hope for these children.

"Because the future is theirs and not ours. If we don't help doing it, we will regret it.” 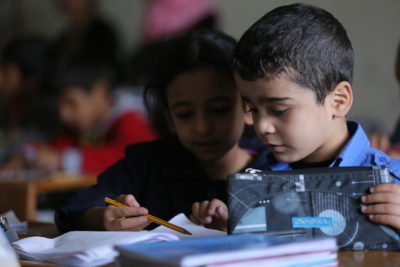