When Malala Yousafzai gave her historic address at the United Nations back in July, the world stood up and listened - and for perhaps the first time, education was put at the top of the global agenda.

Now, we're delighted to see that the energy, optimism and determined campaigning of Malala - and the hundreds of young people who joined her in July - is translating into real progress.

During last month's UNGA meetings UN Special Envoy for Global Education Gordon Brown and Malala joined forces once more in New York, uniting with Pakistani Prime Minister Nawaz Sharif in the mission to provide schooling for over five million children in Pakistan who currently go without. 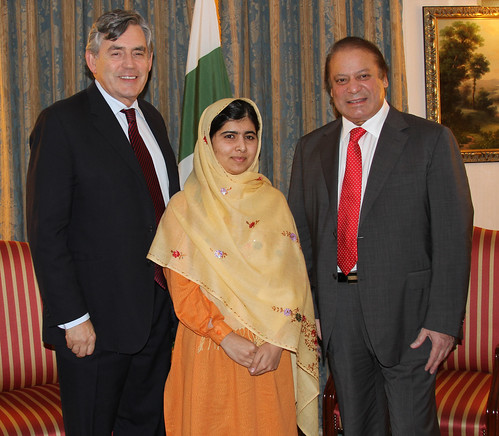 The meeting saw Prime Minister Sharif, who was joined by a delegation of senior cabinet ministers, make a landmark commitment that Pakistan would double its spend on education from 2% to 4% of its GDP by 2018 - representing an increase of approximately $4 billion for education.

Echoing her impassioned speech of July, Malala explained to donors the importance of education, telling the meeting: "Instead of tanks, send books, instead of guns, send pens, instead of soldiers, send teachers. That is the way to change the world".

With more than 5 million children currently not enrolled in school, Pakistan has the world’s second highest out-of-school population. The Prime Minister recognises that his country faces an education emergency, and stated that "education is my government's number one priority".

Gordon Brown underscored the vital need to address these figures, saying: "We are here to back up your country's commitments and the progress that you have already achieved, and the great commitment to education you have shown today."

Violence against female students and teachers accounts for many of the challenges faced by Pakistan's school system, such as teacher absenteeism and low female enrolment. Malala, who was shot by the Taliban just under a year ago, spoke candidly when she told the meeting: "Education is a solution to ending child labour, terrorism, child trafficking and poverty."

With pledges from partners including USAID and GPE to support Pakistan's commitments to address the education crisis, Prime Minister Sharif welcomed increased cooperation in improving education access and quality in Pakistan.

This follows Malala's attendance at the launch of the Youth Education Crisis Committee earlier in the week in New York, which will focus its efforts on securing an education for Syrian refugees in Lebanon.

In a closing remark which brought hope to Malala and her fellow young people in Pakistan, Prime Minister Sharif said "My government is ready to work towards achieving higher enrolment and decreasing repetition rates along side the partners here today".