With the Second International Safe Schools Conference about to begin in Argentina, we look at some of the countries where students and teachers are suffering during armed conflicts.

A school should be a safe place where children can learn, play and express themselves in a stress-free environment.

But in too many countries around the world, education is under attack - from threats, violence, bombs and the military use of schools.

The Safe Schools Declaration was launched in 2015 as an international commitment of support for the protection of students, teachers and their schools during armed conflict. It has now been signed by 61 countries - the latest to join were Armenia and Malta, which currently holds the European Union presidency.

“By signing on to the Safe Schools Declaration, Malta is joining 60 other states in making a clear commitment to better protect education in war-time,” said Diya Nijhowne, director of the Global Coalition to Protect Education from Attack (GCPEA).

“Growing support for the Safe Schools Declaration reflects increasing global concern about the targeting of schools, universities, students, and teachers during armed conflict and the imperative to end these attacks.”

Tomorrow the Second International Safe Schools Conference begins in Argentina - bringing together more than 60 countries to discuss the declaration and how best to take it forward. Ahead of the conference, new research has been published on several countries where schools are under attack

As the conflict enters its third year, education has been severely disrupted.

Up to 1600 schools can no longer be used because they are destroyed, damaged, being used to host displaced families or occupied by military groups. That has put 350,000 children out of school - taking the total deprived of education to two million.

Attacks on schools have risen in a year from 50 to 212, according to a report called Falling Through the Cracks: the Children of Yemen released yesterday by the United Nations children's agency UNICEF.

The number of children recruited in the fighting also increased to almost 1580 from 850 this time last year.

“The war in Yemen continues to claim children’s lives and their future,” said Meritxell Relaño, UNICEF Representative in Yemen. “Relentless fighting and destruction has scarred children for life.”

"The students are traumatised," said Abdullah al-Ezzi, a teacher at Al-Hussein school in Sanaa. "They get scared when warplanes fly over their neighbourhoods. They are scared of air strikes."

Ahead of the safe schools conference in Buenos Aries, the charity Save the Children said world leaders must take decisive action to safeguard children and their education from attacks.

“Every day, our staff are seeing children bear the brunt of war and violence across the world," said Patricia Erb, President and CEO of Save the Children in Canada.

"Far too many children are being prevented from accessing education or are being killed, brutalised or maimed while they study or try and go to school.”

Yemen has not signed the Safe Schools Declaration.

About 25 million children are out of school - and militant violence has disrupted the education of hundreds of thousands of children, particularly girls.

A report published today by Human Rights Watch says attacks by the Taliban and other groups are having a devastating effect on schooling.

It says Pakistan - which has not signed the Safe Schools Declaration - needs a policy to protect students, especially girls, from attack. It should also stop security forces from using schools as bases or for other military purposes.

There were 867 attacks on educational institutions in Pakistan from 2007 to 2015, according to the Global Terrorism Database maintained by researchers at the University of Maryland.

“The Taliban and other militants have repeatedly committed horrific attacks on Pakistani schools, depriving students of their lives as well as their educations,” said Bede Sheppard, child rights deputy director at Human Rights Watch.

“These audacious attacks often occur because, too often, authorities have protected militants or failed to properly prosecute them, and this needs to change.”

The report - Dreams Turned into Nightmares: Attacks on Students, Teachers, and Schools in Pakistan -  is based on interviews with teachers, students, parents and school administrators in the Pakistani provinces of Punjab, Sindh, and Khyber Pakhtunkhwa.

More than 4000 schools have been destroyed, damaged or taken over by armed groups since the war began six years ago.

Last week a school near Raqqa that was being used to shelter families was bombed and at least 30 people were killed. Three students from a Save the Children partner-supported school were killed in a separate attack in Idlib.

Geert Cappelaere, UNICEF Regional Director, said: "Children are being deprived of their basic right to life. They are being denied their right to an education.

"Those events remind us once again that there is no safe place for children in Syria. Children are under attack.

Armed groups are preventing children from getting an education by occupying, looting and damaging school buildings.

Militants and even soldiers from the United Nations peacekeeping mission, known as MINUSCA have used school buildings as bases or barracks, or based their forces near school grounds.

The government and the peacekeeping mission should increase protection for students and schools in areas of the country affected by armed conflict, Human Rights Watch said in a report released on March 23.

“Children have lost years of education in many parts of the Central African Republic because armed groups have failed to treat schools as places of learning and sanctuary for children,” said Lewis Mudge, Africa researcher at Human Rights Watch and co-author of the report.

“The government and the UN can do more to ensure that fighters stay away from classrooms and that children can safely go to school.”

The report - No Class: When Armed Groups Use Schools in the Central African Republic - gives many examples, including one where the Seleka rebel group occupied a primary school at Ngadja in the Ouaka province.

A student there said: "The Seleka received new guns on January 13 (2017) and they were shooting them. We were in class when they started shooting behind the school.

"We wanted to run but the teachers told us it was safer to stay down in the class room. I am scared to come to school. I am scared the Seleka will attack me."

The CAR has signed the Safe Schools Declaration.

In the Darfur region alone, 46 attacks on schools were documented from 2013 to 2016. Schools were totally or partially destroyed and looted in aerial bombardment and during armed clashes.

Schools were also used as military bases in several areas by the state's armed forces, according to a report published on March 24 by the UN Secretary-General.

It also found hundreds of children had been recruited by armed groups, including government forces.

"Boys and girls continued to be victims of grave violations committed by all parties to the conflict, including killing and maiming, sexual violence and attacks on schools and hospitals,” said Leila Zerrougui, Special Representative of the Secretary-General for Children and Armed Conflict. 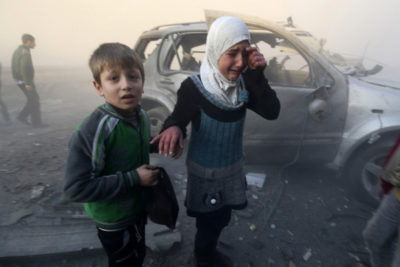