In a country with a high rate of missing fathers, the importance of dads in the first 1000 days of a child's life should be promoted says a group of NGOs.

A report into fatherhood in South Africa has detailed the importance of a dad’s contribution in the first 1000 days of a child’s life.

The country has a high rate of fathers who do not live in the same home as their children or have no involvement in their upbringing.

But research shows that young children whose fathers are involved in parenting have the best outcomes in later life. Babies whose dads are "hands on" and "fun" learn faster.

A report called The State of South Africa’s Fathers has been released by a group of non-government organisations and charities - Sonke Gender Justice and Promundo, with Save the Children, Plan International and Oxfam GB - as part of the Mencare Global fatherhood campaign.

A child’s brain is 90% developed by the time they are five years old. So getting the early years right is crucial for a child to reach her or his full potential.

Theirworld's #5for5 campaign calls for countries to invest more in early childhood development and particularly in pre-primary education.

The report says that “scientific evidence confirms that this is the period of most rapid brain growth, and that the child develops in response to the environment, particularly in the context of affectionate and responsive interactions with adults".

But it adds: “A lot still needs to be done in recognising and promoting father involvement with mothers and children in the first 1000 days in South Africa."

The early years are a "sensitive and unique time" when the foundations for good health, development, learning and relationships are established, said the report.

“It is also a sensitive time for parenting," it added. "Studies on infant–father attachment indicate that it is important for fathers to begin the bonding process during the prenatal period by listening to the baby’s heartbeat, reading to the baby in utero and being present at the delivery.”

The report concludes: “Fathers, mothers, families, communities, civil society and the state must come together to promote father involvement… Taking action on multiple levels is the only way of ensuring that children’s right to the resource of fatherhood is realise.”

The United Nations children's agency UNICEF has also been leading the way by trying to get more fathers involved with the Super Dads initiative. It forms part of the Early Moments Matter campaign.

“There are many benefits for the children - but also spouses, the couples themselves and the whole family when male figures are highly involved in the function of parenting.

"There is a lack of understanding of the benefits of co-parenting and the importance of fathers’ role in the development of children’s brain.

“Thousands of fathers from across the world got behind the campaign and shared their experience of fatherhood.” 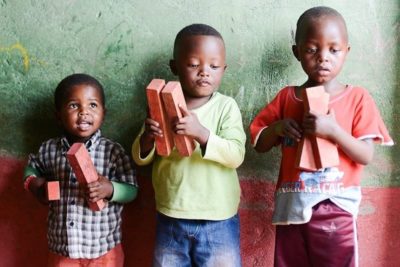