With three in four primary-age children out of school in the world's newest country, we look at the factors that are keeping them away from the classroom.

Nearly three-quarters of primary school-aged children in South Sudan are being denied an education due to civil war and a food crisis.

The world’s newest nation has 72% of children out of school at primary level - the highest rate of any country.

And 76% of schoolgirls in South Sudan are currently not in school - also the highest rate globally, according to the United Nations children's agency UNICEF.

The three-year-old conflict in South Sudan has left as many as 300,000 people dead and displaced more than 3.5 million - around one-quarter of the population.

The conflict has badly affected the country’s oil-dependent economy while children and schools have been singled out as targets by armed groups.

To compound the misery, nearly half the population do not have a reliable food supply, according to the UN.

Anne-Birgitte Albrectsen, chief executive of Plan International, said children in South Sudan are facing a “triple tragedy” due to a brutal conflict, famine and the denial of their right to an education.

“Our teams in South Sudan can confirm that almost three-quarters of the country’s primary-school-age children are missing out on an education," she said.

She added that thousands of children - mostly girls - are kept out of school to do housework or help their families search for food.

In times of food crisis, many families often see the value in sending their boys to school but prefer to keep girls at home to do housework or help to find food.

It is also common for girls to be sold into early marriages in exchange for cattle.

Albrectsen said: “Many families are eating barely one meal per day so they see keeping their girls at home or selling them into marriage as a useful way to save money or gain life-saving resources, especially as women and children in the villages have been left to fend for themselves.

"In village after village, most of the men are missing, gone in search of new pastures for their livestock or to fight in the conflict.”

At lower secondary school level, South Sudan has the second-highest rate of out-of-school children in the world, with 60% of pupils being denied education.

Niger has the highest rate at 68% while the Central African Republic is third with 55%.

South Sudan gained independence from Sudan on in July 2011 as the outcome of a 2005 agreement that ended Africa's longest-running civil war. It is home to over 60 different major ethnic groups.

Since the South Sudanese civil war began in December 2013, one in three schools have been attacked by armed forces, according to a recent report by the South Sudan Education Cluster - a collaboration of NGOs, UN agencies and academics.

Another entire generation is at risk of being illiterate when they reach adulthood potential; this will affect communities and the country as a whole.

The cluster said 31% of schools have suffered at least one attack. One in four schools operational in 2013 were found to be closed by 2016.

In addition, 31% fewer teachers were registered at the end of the 2016 school year than at its start.

The student-to-teacher ratio is 100 students for every qualified teacher, according to the Education Cluster.

Its report said the interruption of education has both short and long-term consequences for the development of South Sudan.

The report added: “Children who are not in school will lack the structure and stimulation for healthy cognitive, social and emotional development that they require.

"Another entire generation is at risk of being illiterate when they reach adulthood potential; this will affect communities and the country as a whole, stunting national development and impeding the realisation of the Sustainable Development Goals.”

The Education Cluster is also concerned that the education crisis risks fuelling new conflicts, as an estimated 17,000 children have been recruited into armed groups.

“The longer children stay out of school, the more likely it is that they are recruited into armed groups,” it said.

According to the National Ministry of Education, only one-third of South Sudan's 28,000 teachers were qualified in 2015.

Overall, South Sudan has the highest rate of out-of-school children among 22 countries in conflict zones, according to the UN.

Behind it are Chad and Afghanistan. On the whole, 25 million children between 6 and 15 years old are out of school in these conflict zones.

“At no time is education more important than in times of war,” said UNICEF Chief of Education Josephine Bourne. “Without education, how will children reach their full potential and contribute to the future and stability of their families, communities and economies?”

Many South Sudanese have fled the fighting to Uganda. According to a recent report by IRIN, an average of 2500 people had been arriving there every day since last July. In early December that figure was as high as 7000.

On 19th December, the UN’s refugee agency, UNHCR, said that 584,573 South Sudanese refugees had arrived in Uganda since the civil war broke out in December 2013.

Meanwhile, Médecins Sans Frontières (MSF) said that close to 25,000 people were displaced by intense fighting this week between the South Sudan People’s Liberation Army and the Agwelek forces, around the town of Kodok.

“This is a disaster in the making, just as the demand is greatest,” said Marcus Bachmann, the Médecins Sans Frontières (MSF) head of mission for South Sudan.

"Given the scorching heat and the exposure of the population to the elements, soon we will see people suffering from chronic dehydration and diarrhoea, as well as diseases like cholera.” 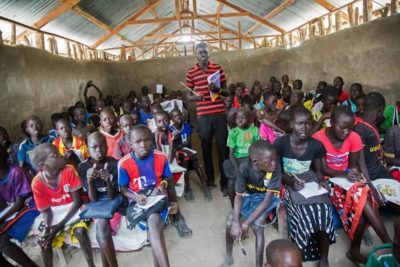 Despite civil war, 'phenomenal' project gets 60,000 extra children into school