In a special episode of her Better Angels podcast series, Theirworld President Sarah Brown talks to actor Sir Patrick Stewart about his campaigning, his first acting role ... and how he met Nelson Mandela in an elevator.

His features are instantly recognisable from his iconic TV and film roles including Star Trek: Next Generation and X-Men. His voice is rich and robust and his stagecraft is admired by theatre-goers and critics.

In a special 45-minute episode of her Better Angels podcast series, Theirworld President Sarah Brown talks to Sir Patrick about his career and the causes that are very personal for him, including the British charities Refuge and Combat Stress.

"I like to think that the feelings that I have when I talk about Refuge or Combat Stress play a quite strong role in how much I can affect people and get them to support the campaigns," he says.

He tells Sarah how his father's drinking and violence towards his mother when he was young led him to become a patron of Refuge, which supports domestic abuse victims - most of them women and children.

Sir Patrick adds: "I do this activism for my mother because I couldn't do it for her there."

The actor said his father had "a very bad press from me over the years".

Then two years ago - while featuring on the BBC TV genealogy series Who Do You Think You Are? - he discovered something startling about his dad. He had returned from action in the Second World War suffering from severe shell shock.

"I had absolutely no idea," says Sir Patrick. "Nobody in my family ever mentioned it, he never talked about it and we now know what shell shock meant. It meant Post Traumatic Stress Disorder.

"When I talk to experts about this and describe my father and his behaviour, they said without doubt, these are classic symptoms of someone suffering severely all their lives."

This led Sir Patrick to become an ambassador for Combat Stress, the mental health charity that helps military veterans.

"It campaigns for more care to be taken care of ex-military men and there's so, so many of them," he says. "It's even worse in the United States.

"I have an emotional connection to both of these organisations."

Sir Patrick talks about his childhood and how the conditions he experienced helped to shape his views on the world.

"I knew that we were quite poor," he says. "We had one room downstairs and one room upstairs and there was a partitioned-off corner where my brother and I slept and a stone step and a door that opened on to a yard and that was it. No hot water, no bathroom.

"I came very early on to understand about the inequalities of life and the unfairness of it. It was elements like that, which actually still mean just as much to me today."

In a previous episode of Better Angels, Sir Patrick was one of several interviewees who talked about the art of speaking in public.

In this more in-depth chat, he covers a variety of subjects - including his first ever stage role at school, his support for various social issues, which public speakers he admires ... and how he met Nelson Mandela in an elevator. 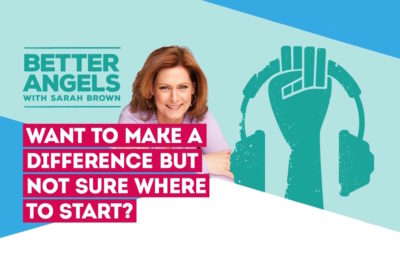 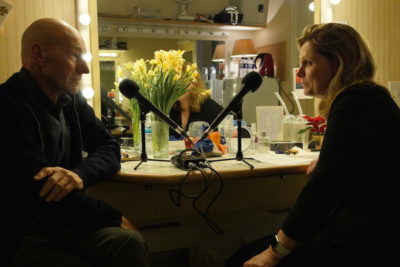