An end to the war in Yemen is the dream of every Yemeni child. Whenever I ask children about their dreams they don’t say they want a PlayStation, a toy or any game but say:

Imagine, these are the dreams of children. Can we help them turn their dreams into a reality?

The conflict that began in late-March is now in its fifth month. The coalition led by Saudi Arabia has been either bombing or blocking the most vitally needed humanitarian aid, killing thousands of civilians, destroying Yemeni infrastructure and other non-military targets, such as schools, houses, hospitals, historical places, and universities.

According to UNICEF more than 3600 schools have been forced to close. Many students have fled with their families to safer areas of the country without completing the end of term exams. At least 248 schools have been directly damaged and 270 others are hosting Internally Displaced People (IDPs).

UNICEF is asking for $11 million to support the rehabilitation of damaged schools, provision of teaching and learning resources, and training of teachers and community workers to provide psychosocial support.

After my home was destroyed by the coalition and its gang who call themselves “the resistance,” we moved to a safer place. There I found a beautiful school but unfortunately it was closed. I asked people there: “Why is it closed?” They said: “It is closed because Saudi Arabia will bomb it in any time.”

I asked: “Are there armed Houthi fighters or weapons?” They said: “No, it is empty but they will bomb it because it is a school like many schools that have been bombed by Saudi Arabia. It is an aggressive enemy.”

If Saudi Arabia bombs the areas of the exams, the government will have to delay the exams. The students who live in dangerous provinces like Taiz and Aden will take the exam after the war.

Despite the aggressive airstrikes on Sana’a, every day many students challenge the coalition and their airstrikes. This can be seen with the 90% of students who return to school to study.

Before the conflict the main challenges for education in Yemen were poverty, family and lack of schools, especially in villages. But now due to the conflict and Saudi Arabia’s siege and aggression the poverty rate has sky-rocketed.

Yemenis are dying from deprivation, from lack of medical care, from lack of clean water, or not enough food. Furthermore, many children have lost their parents and relatives due to the ongoing war in Yemen. They are in urgent need to psychological, social and medical care.

Many lost their relatives who were supporting them financially, forcing the children to work instead of study. Moreover, many of the children are physically affected, losing limbs in bomb blasts.

Despite the war we find many children want to study. That is why I am going to make a campaign to stop war on my country. The world should be screaming about this and pointing to the other nations. If you really care about children write a post to stop the war on Yemen and use the hashtag #stopairstrikes on Yemen. 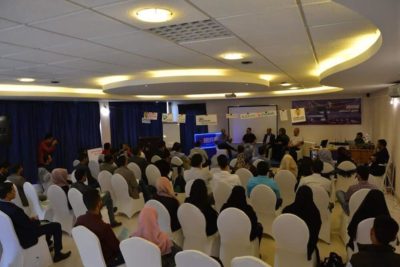 "Startups are the best solution to provide job opportunities for youth"