Back to school in Cote d'Ivoire and "gigantic" efforts to educate Venezuelan refugees  - but conflicts in Yemen and Burkina Faso are harming children.

Warning as children go back at school in West Africa

Thousands of children in masks flocked back to school in Cote d'Ivoire this week to restart lessons after a two-month coronavirus shutdown.

One of the first countries in West Africa to reopen schools, it has yet to contain the virus. But authorities are confident students can study together in safety because of hygiene measures.

More than 1.5 billion children and young people in almost every part of the world have had their education disrupted because of the closure of preschools, schools, colleges and universities.

In the Adjame neighbourhood of the coastal city of Abidjan in Cote d'Ivoire, children in backpacks queued to wash their hands before entering their school, where they sat one to a desk with bottles of sanitising gel within reach. Samira Cisse, 14, said: "At first we were a little scared. When we saw that the protective measures were being respected, the fear went away."

Nearby countries are likely to follow closely whether the decision to reopen schools causes a spike in infection. With millions of children still at home, Save the Children says many could face serious setbacks due to limited options for distance learning in parts of sub-Saharan Africa.

The organisation said about 12 million children have been affected by school closures across the West African countries of Burkina Faso, Mali and Senegal. While welcoming the decision of authorities to reopen schools, Save the Children warned they must remain safe to limit the risk of Covid-19 contagion for children and their families.

Schoolchildren in Mozambique are facing “catastrophic outcomes” from the pandemic, senior officials from the UN and World Bank have warned. Already more than a third of students drop out before Grade 3 and less than half complete primary school. The government is working with the UN, World Bank, key agencies and other partners to explore alternative and innovative ways to ensure learning can continue remotely.

In Europe, France said it will accelerate a plan to re-open high schools and junior high schools after most primary schools restarted classes. Schools in England will begin to reopen on June 1.

Mobile phone companies who are part of UNESCO’s Global Education Coalition have stepped up efforts to help students affected by school closures to keep learning from home.

Theirworld is a member of the coalition, which was launched in March to pool the skills and resources of a wide range of public and private entities to deliver inclusive and equitable distance learning tailored to countries’ needs.

Coalition members Orange and Vodafone are offering free access to distance education platforms in some countries where schools have been closed due to  coronavirus. In Samoa, Vodafone is providing around 80,000 learners with free, unlimited 4G data access to a range of approved educational websites.

In sub-Saharan Africa, Orange - through its subsidiaries - is helping in Burkina Faso, Guinea, Mali and Democratic Republic of the Congo. Similar packages are planned in Botswana, Cameroon, Côte d'Ivoire, Liberia and Madagascar. Free access is also being extended to Egypt, Jordan, Morocco and Tunisia.

The Global Business Coalition for Education - an initiative of Theirworld - is also calling on the business community to provide solutions so that disadvantaged and vulnerable children are not left behind. GBC-Education is working urgently to support learning in Ghana, Kenya, Nigeria, Somalia, South Sudan and Uganda.

Years of war in Yemen have put more than two million children out of school. Now the spread of coronavirus has resulted in more children being forced to earn money for their struggling families.

"We are seeing a growing number of families resorting to harmful coping mechanisms such as begging, child labour and marrying of children to survive," said Charlie Yaxley, spokesperson for UNHCR.

The UN refugee agency said its work in Yemen is near a "potential breaking point" and that the health system "has in effect collapsed". About 80% of the malnourished population rely on humanitarian assistance, making it the world's biggest humanitarian crisis even before the pandemic.

One in five schools can no longer be used as a direct result of the conflict that has devastated the already fragile education system.

Schools under attack in Burkina Faso

Attacks on teachers, students and schools in Burkina Faso since 2017 have had a devastating impact on children’s access to education, a Human Rights Watch report has said.

The organisation has documented scores of education-related attacks by Islamist groups in six of the country’s 13 regions. They have killed at least 12 teachers and beaten, abducted and threatened others; intimidated students; terrorised parents into keeping children out of school; and damaged, destroyed, and looted schools.

“Armed Islamist groups targeting teachers, students and schools in Burkina Faso are not only committing war crimes, but are undoing years of progress in improving children’s access to education,” said Lauren Seibert, children’s rights researcher at Human Rights Watch and the report's author.

While the groups have not appeared to target children for violence during school attacks, they often fire shots in the air to terrify students and teachers. One student told HRW: “I was really scared. We thought they were coming to kill us."

260,000 Venezuelan refugee & migrant children are out of school in Colombia.

Colombia has made "gigantic" efforts to enrol almost 200,000 Venezuelan refugee children into its schools, according to a new UN report.

But UNESCO said about 260,000 are still getting no education and called for greater financial and technical support to help displaced Venezuelans and host communities.

More than 1.4 million migrants crossed the border to escape from Venezuela's economic crisis, leaving Colombia with a huge challenge.

UNESCO said of the refugees: "It is a very young population, for whom access to education and lifelong learning opportunities would allow them to develop their potential and contribute to the host communities." 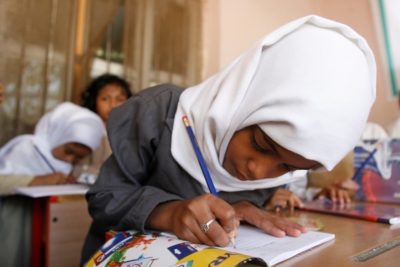