A charity is spreading the word about life for children in refugee camps on the Sudan-Chad border - and the reaction from students in the UK has been amazing.

“Children have an amazing way of connecting and they see that people are people - that we are all together, that we are the same,” said Giovanna Stopponi.

She was speaking about the reaction of schoolchildren in east London after she explained the situation facing tens of thousands of children stuck in refugee camps on the border between Sudan and Chad.

Giovanna is director of a small charity based in the United Kingdom called REACT (Refugee Education Across Conflicts Trust), which helps refugee children to continue with their education after being displaced.

REACT works on the Sudan-Chad border, where there are around 300,000 people in 12 camps.

She said: “The response from children in schools here in the UK has been amazing. They get it completely.

"Recently I did a big drive in east London in three schools and I introduced the matter of the children in Chad. I told them ‘They cannot access education like you do, they cannot access sport like you do’ because they are in a difficult situation outside their own country.”

After hearing about REACT’s work, the British children immediately wanted to communicate with the refugees from the Darfur region of western Sudan. So they wrote letters and made drawings.

"They drew themselves in an east London estate - then they’d draw what they thought the children from Darfur would look like in their camps ... a picture of a child but instead of an estate it was a child in a tent or hut.”

After she personally delivered the messages to the Darfuri children in Chad, Giovanna took their replies back to the British schoolchildren.

She often give talks in schools to raise awareness of refugees and to explain why people have fled their homes.

Giovanna formed REACT in 2007 with award-winning journalist and film-maker Phil Cox, who was recently kidnapped and tortured in Sudan after entering the country to report on the latest crisis in the Darfur region for Channel 4 News.

REACT is funded mostly by private sponsors and supports refugee children by providing them with textbooks from their home countries, where possible.

Giovanna explained that in 2007 she and Cox were supporting and documenting the plight of refugees in Darfur and had spent a lot of time with them.

They’d been living in camps along the border between Sudan and Chad since 2004 after fleeing violence - and many made a direct request for textbooks so they could continue with their education.

Giovanna said: “At that time their hope was to go back to Sudan and be active in their society. They made a specific request for us to help the with their education, to get textbooks of their official curriculum.”

Since then Giovanna has supplied some 15,000 books to the refugees but said it has not been easy because until recently there was conflict between Sudan and Chad.

She said: “Politically it’s been very sensitive, to get the books out of Sudan into Chad, which is an Arab, Francophone country. It’s not Anglophone like Sudan so there is a difference in culture.”

Giovanna said that every penny raised goes towards the needs of communities as expressed by the affected people themselves.

“We target directly the needs of people," she explained. "I do surveys and try to keep up to date with situations on the frontline.

"I try to understand what are the gaps and I try to support groups that are also independent and don’t receive money from big NGOs or big IGOs or governments. Mainly I support initiatives on the ground - solidarity networks specifically. I always try to listen.”

In 2015, REACT also became involved in Greece because of the refugee emergency there and the number of people crossing the sea, many desperately trying to get to Europe.

Giovanna said: “I became involved with the Solidarity Network. I started by supporting the efforts of volunteers with emergency supplies and medical assistance.

"But since April 2016 I realised that thousands of people were trying to integrate and get some normality back into their lives, so I promoted the delivery of books to refugee camps in Greece, in shelters, in squats and self-managed accommodation in Athens, in Lesbos, in the islands and refugee camps around Greece.”

REACT’s main role has been providing books - non-religion, literature, non-propaganda -  in Arabic and Farsi for Syrians, Iraqi, Iranians and Afghanis.

Giovanna did this by founding a number of small libraries and providing textbooks for children.

She said that many refugee children aged 10, 11 and 12 have never been to school in their own countries because they’ve been on the move for several years.

The absence of educational resources reduces the possibility of the children returning to their country of origin as equals and helps to ensure they are not condemned to the lower tiers of society.

She added: “They could speak their own language but they cannot read or write it. After speaking to their parents, they expressed this desire to have their children learn their own language - reading and writing - in order to keep their own identity.”

More than one million refugees have travelled to Greece since 2015 - mostly from Syria, Iraq and Afghanistan, according to the UN refugees agency UNHCR.

Giovanna explained that learning their own language has been problematic because many NGOs are focused on helping the refugees to integrate into society by learning the language of the culture where they’ve ended up - so they often learn Greek, German and English.

She said: “I try to encourage humanitarians to put some resources into helping refugees - especially the children - to keep their own language.”

She studied law in Italy before moving to the UK in 1994 and has worked extensively in the humanitarian sector for several years, as well as for Amnesty International.

Giovanna has worked with international non-governmental organisations including PACT Sudan, where she was project manager running development projects in India, Kenya, Ethiopia, South Sudan and Eastern Chad. These projects dealt with issues ranging from women’ empowerment through to children’s health and education.

She also managed health projects in Uganda for the Tropical Health and Education Trust, a UK-based charity. She is also a freelance producer for an independent film company making fiction, documentaries and reportage for broadcasters around the world. 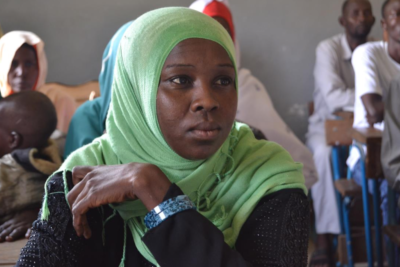