They only have one arm each - but the Chirwa brothers decided to do something to help the under-fives in their village in Malawi.

They both have a disability – each lost an arm in separate freak accidents. But that didn’t stop two brothers in Malawi setting up a school to educate children under the age of five.

In fact, the siblings say their only disability is that they can only lift one child at a time.

Watson and Akim Chirwa realised there was not proper provision for under-fives in their home village of Kathenthere. So they decided to set up their own preschool. That was eight years ago and it’s still going strong.

“Their aim was to provide opportunities for young children in their area to play and learn their numbers and letters to prepare them for starting primary school," explained Pam Haigh, UK General Manager for the charity RIPPLE Africa.

It has helped the brothers to build a new preschool - and the number of children attending is growing.

"Their motto was 'catch them young'," said Haigh. "Other villagers thought it was a great idea and started to send their children."

But millions of children with disabilities are not as fortunate. They are being left behind from a very young age - particularly when it comes to early learning and education.

Governments and international donors are failing to invest enough in early interventions for disabled children and provide inclusive, quality pre-primary education. That leaves too many children condemned to a lifetime of disadvantages.

Theirworld is campaigning for every child to have access to two years of free, quality pre-primary education.

Theirworld believes governments and donors should significantly scale up their support for children with disabilities in their first five years - including access to early learning and quality pre-primary education.

Catching them young - as the Chirwa brothers would say - is crucial. Early interventions set the path for any child's future - but particularly if they have a disability.

Pam Haigh explained how the brothers, who were educated in Zimbabwe, ending up launching the school.

“Watson and Akim Chirwa were living in the poor rural north of Malawi," she said. "They realised that there were few opportunities for very young children in their local village, Kathenthere, to learn and play - as the nearest preschool was over 1.5km away.

“In Malawi, primary school education is free and compulsory but most early years education is provided by community volunteers.

“Watson and Akim had both received a good education in Zimbabwe and wanted to help others on their educational journey.”

So the brothers decided to take matters into their own hands - and set up and run their own preschool in an old church building in their village. They wanted it to be free to any children whose families wanted them to attend.

Neither has allowed their disability to stop them achieving their aims in life and they are great role models for others in their community.

Despite their own disabilities, they now have 70 children in their school. As well as teaching them, they also feed the children, knowing that this meal may be the only one they get that day.

It's not just the number of children that’s growing. The teachers grow sweet potatoes so they can feed the children a hot nutritious meal during their school day.

What is more remarkable about this story is that the brothers have overcome disabilities themselves.

"Each has only one arm," explained Haigh. "Watson lost his arm in a train accident in Zimbabwe and Akim, who has epilepsy, fell into a fire when suffering a fit and his burns were so severe that his arm had to be amputated.

"However, neither has allowed this to stop them achieving their aims in life and they are great role models for others with disabilities in their community.

“It was hard for them to teach the children how to tie things, so they had to seek help for this. There was also some reluctance from local people to volunteer to help them dig a latrine for the children to use.

"So Watson and Akim had to learn how to manage the use of the shovel with each using only their good arm. They succeeded!”

In 2011, the brothers approached UK-based charity RIPPLE Africa, which supports education, health and environmental projects in their area.

"Despite running seven other preschools, we were so impressed by the commitment and dedication of the two brothers that we agreed to pay all the running costs for Kathenthere – including salaries for Akim and Watson (a luxury they had not had before) and an additional teacher to support them."

The school was originally in the church, which had a leaking roof and termite-damaged timbers.

“In 2012 when we had been able to raise enough funds, RIPPLE Africa built a brand new preschool,” said Haigh.

“Watson has now moved on and is working for RIPPLE Africa on a sexual education project with young adults - but Akim continues to run the preschool with the support of another teacher.

“We are delighted with its success, as are local parents. Two inspirational brothers helping others in their community. Disability?  What disability?"

She conducts regular talks about disabilities to local primary and secondary schools, church groups and health clubs to tackle the social stigma and misunderstandings surrounding disabilities in the community. 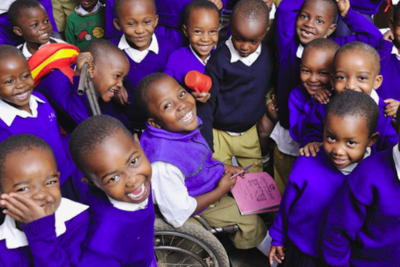 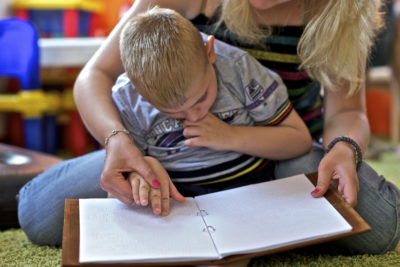 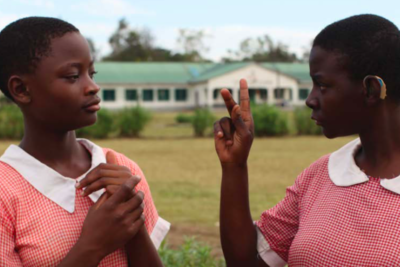