A new year, a new decade - but sadly attacks on children just trying to get an education continue to feature in our news roundup.

An attack on a school bus that killed 14 people - including at least seven students - and wounded nine others in Burkina Faso has been condemned.

The bus ran over an improvised explosive device in northern Sourou province, said the government. Islamist groups with links to al Qaeda and Islamic State have increased attacks in the region next to the border with Mali.

“This devastating attack on children returning to school is unacceptable. Children caught up in conflict are not and must never be targets,” said Alice Albright, CEO of the Global Partnership for Education. “Attacks like this should be a wake-up call to the world. Global leaders must do more to prevent attacks on education and protect children caught up in wars.”

GPE has worked since 2002 with local education partners to support the government of Burkina Faso’s efforts to improve the quality of education and ensure more children complete basic schooling.

Escalating violence in Burkina Faso has displaced nearly half a million people and forced almost 1,500 schools to close - depriving over 200,000 school-aged children of education.

Every child should have a safe place to learn - but 75 million have their education interrupted by conflicts and emergencies. Theirworld's #WriteTheWrong campaign highlights the need for safe schools.

Students and teachers killed in Syria and Kenya

In other attacks on education since the start of the year, four children and their teacher were killed in Syria and four Kenyan schoolchildren and a teacher died in a gunfight.

Syrian regime forces killed eight civilians, including the four students and teacher, in Idlib province on Wednesday, according to monitors. Part of the Abdo Al-Salama School building in the town of Sarmeen had been turned into a shelter for displaced people.

The Kenyan children who died were caught up in shooting between police and al Shabaab militants from Somalia who attacked a telecommunications mast, said police.

"I console the families of the four pupils that were killed by the heartless terrorist militia who are hell-bent on slaying innocent lives, instilling fear and disrupting education in the region," Garissa County Governor Ali Korane said in a statement.

The recent escalation of violence is taking a devastating toll on children’s education in #Tripoli, Libya. #ChildrenUnderAttack @UNICEF https://t.co/yXtGVs65Vu pic.twitter.com/jjIfZTC9SL

Escalating violence in and around the Libyan capital Tripoli has shut 210 schools and forced more than 115,000 children out of education.

Five schools have been destroyed. Four of them came under attack on one day in Soug al Jum'aa, causing extensive damage and affecting nearly 3,000 students.

"Recent attacks on educational facilities and overall insecurity in and around Tripoli are putting children’s lives on the line just by going to school each day," said Alla Almsri of UNICEF Libya.

"No parent should ever have to choose between their children’s education or their safety. Rather than safe places to learn and to grow, schools in Tripoli have become places of fear."

UNICEF called on all parties in the conflict to protect children at all times and stop attacks on schools.

Efforts are underway to limit the disruption to schooling caused by devastating floods in Indonesia. At least six children have died and tens of thousands had to leave their homes in the capital Jakarta – with the peak of the rainy season still to come.

The government said 290 schools have been affected, with 201 flooded and 89 inaccessible. In West Java province, 12 schools were completely destroyed.

Dino Satria, Humanitarian Director for Save the Children in Indonesia, said: “School buildings are now used as shelters - that means some children run the risk of missing out on school.  We will suggest to the local authorities to find solutions for displaced people who need shelter.

“We stand ready with school kits, tents which can be turned into learning centres and safe places for children to play.”

A programme to provide safe and equitable education for children and youth in crisis-torn South Sudan was officially launched this week.

The Education Cannot Wait fund announced in December a two-year $20 million catalytic grant to Save the Children in South Sudan. This will set in motion a multi-year educational response programme.

When fully funded, it will help to tackle South Sudan's immediate education crisis while moving towards a more positive development strategy. It is estimated that 2.2 million children - 75% of them girls are out of school.

“To build peace and opportunity for the children and youth of South Sudan, we need to invest in equitable, safe, protective and quality learning environments for internally displaced people, returnees, and host community girls and boys,” said education minister Deng Deng Hoc Yai. 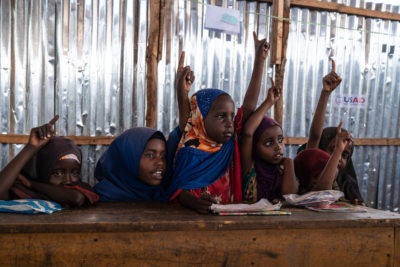 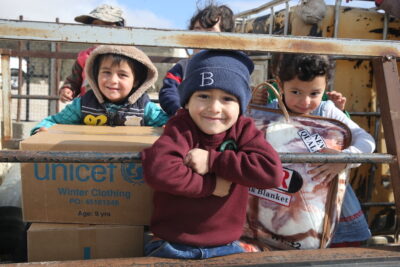