Find out about a global pledge to support children's rights, the 100th country to sign the Safe Schools Declaration and 107 new schools in Syria's troubled Idlib province.

105 countries pledge to 'leave no child behind'

More than 100 countries have backed a Global Pledge to renew their commitments to children's rights - promising "bold action to ensure we leave no child behind".

The 105 nations aligned themselves to the pledge for World Children’s Day on Wednesday, which also marked the 30th anniversary of the adoption of the Convention on the Rights of the Child (CRC).

“At the United Nations headquarters and in more than 50 countries, children and young people have been speaking out at national summits on issues that matter to them, like the climate crisis, safety in an online world, rising migration and lack of opportunities," said UNICEF Executive Director Henrietta Fore.

One of the major challenges facing child is access to quality education. A UNICEF report on 30 years of the CRC said: "We urgently need a renewed commitment to access, learning and investment in education, particularly for the poorest and most marginalised."

Today marks 30 years of the UN Convention on the Rights of the Child. We hope you’re jumping with joy like this boy in Uganda. Let’s celebrate the universal rights of every child to go to school, raise their voice and share their talents with the world. pic.twitter.com/6hhGEalD7M

Theirworld's #WriteTheWrong campaign is about raising awareness and calling for bold action to help the 260 million children out of school and the millions more who are in classrooms but not getting the basic skills they need.

Iconic landmarks around the world turned blue to mark World Children’s Day - including the Empire State Building, Panama Canal, Shanghai Tower and the Monument for African Renaissance in Senegal.

UNICEF Goodwill Ambassador Millie Bobby Brown - star of TV's Stranger Things - said: “Young people my age are facing so many new challenges today that 30 years ago were hard to predict. I’m proud to add my voice to all those around the world who are asking for solutions to today’s problems such as bullying, access to education, mental health awareness, suicide prevention and climate change.”

Ukraine has become the 100th country to sign the Safe Schools Declaration - a commitment to protect schools from attack and military occupation.

The declaration stresses the importance of continued education during emergencies, something that is often disrupted.

Since the conflict began in Ukraine in 2014, more than 750 educational facilities have been damaged or destroyed due to hostilities. Between January and April this year there were 12 attacks on schools.

Nearly 40 million children a year have their education interrupted or ended by wars in which schools are destroyed or occupied. Theirworld's report Safe Schools: The Hidden Crisis revealed that between 2013 and 2017 there were more than 12,700 attacks on schools, harming more than 21,000 students and educators in at least 70 countries.

107 new schools to be opened in Idlib

More than 42,000 children will benefit from an announcement that Syria Relief, the UK's leading Syria-focused charity, will operate a further 107 schools - taking its total in the country to 159. All the new formal schools will be run in Idlib Province.

"It is not just vital that every child gets an education, it is a basic human right," said Syria Relief Chief Executive Othman Moqbel. "However, too often during this conflict, we have seen children denied an education by violence.

"The schools operated by Syria Relief boast great education outputs for the children, despite operating in unbelievably difficult and dangerous conditions."

Since the start of the Idlib military offensive in April, Syria Relief has had four of its schools hit by airstrikes. In September, it released a report into the impact the conflict is having on education called No School To Go Back To: The Impact of Airstrikes on Syria's Schools. An air strike this week killed eight children and injured dozens more at a camp in Idlib.

PRESS RELEASE: "On my way to school, I fear suicide attacks, kidnapping and [I'm afraid] that someone might kill me. There is war in my country. People are killing children; we are not protected." says Hemat* 10 from #Afghanistan #STOPTHEWARONCHILDREN > https://t.co/D1qPiKjOH4

Two in three parents in Afghanistan say their children are scared of explosions, kidnappings or other forms of extreme violence on their journeys to school.

Girls feel less safe than boys and many children are too scared to even go outside their homes, according to a shocking report by Save the Children.

“On my way to school, I fear suicide attacks, kidnapping and that someone might kill me," said 10-year-old Hemat, who lives in a small village in Kabul province and attends an informal school set up by the charity because there is no school nearby.

Save the Children interviewed 600 parents and 90 children across four provinces . The report revealed that only 30% of children feel safe at school and 38% of parents said children harm themselves due to experiencing conflict

The World Food Programme has called for urgent investment to stem a deepening disaster in the Central Sahel region of Africa, where many schools are shutting because of displacement.

WFP helped 9,700 adolescent schoolgirls in Niger with scholarships between January and September. But now schools are closing or being used as shelters and in many conflict-affected areas one in three children cannot attend classes.

“At the moment what we’re seeing is that people go further south in search of two things - safety and ‘keeping my kids in school’," said Alexandre Le Cuziat, an Emergencies division desk officer with WFP. 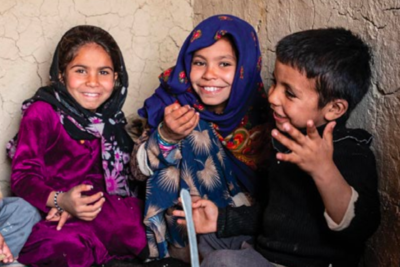