The effect on thousands of children will be "devastating" say agencies working in the region, ahead of a major UN meeting on refugees.

Ahead of a crucial United Nations meeting on refugees next week, it has emerged that education programmes in Jordan have been slashed - affecting 45,000 vulnerable Syrian refugee children.

As the result of a funding gap of $8.6 million, only 10,000 Syrian refugee children out of 55,000 eligible children will continue to get financial support from UNICEF.

Calling on the international community to continue providing assistance, the UN children's agency said education is critical for Syrian children.

Save the Children - a co-host of next week’s UN meeting - said cuts in international assistance will have a “devastating impact” on services in the region for refugees, including education.

Despite assurances made by world leaders in 2016 that every Syrian girl and boy would be in school by last summer, more than 30% of them are still being denied an education in their host countries.

In Jordan, UNICEF has had to reduce the scale of several education programmes for Syrian refugee children due to insufficient international support.

In response to the crisis, UNICEF Germany has transferred 500,000 euros (about $585,000) in emergency aid, calling on stakeholders to come forward with further donations.

Only 10,000 refugee children will receive financial support to cover educational expenses such as school material or uniforms. Another 2500 students in remote areas will now struggle to get transport to and from school.

The two UNICEF Jordan initiatives to be hit hardest are the Hajati and Makani programmes.

Hajati is a cash-for-education exchange, which grants students 20 Jordanian dinars a month, or about $28, to help with the cost of school.

Administrators work with families to determine how that money should be spent - on transportation, educational materials or to make up for the household income lost by keeping a child in school. Last year 55,000 families received Hajati funds, while 10,000 are set to receive them this year.

Makani is an after-school programme that provides day care, homework help and child protection services. Of the more than 200 centres that were in operation in Jordan during the 2017 school year, less than half of those will be open again in are open this year.

Christian Schneider, CEO of UNICEF Germany, expressed his fear that “more refugee children in Jordan will continue to drop out of school and fall victims to child labour or early marriage”.

Without adequate funding and tracking, the international community is letting down millions of vulnerable children and youth.

“Our contribution alone cannot secure the continuation of all UNICEF educational programmes,” Schneider said, while calling on the international community to continue to provide assistance.

The funding shortfall could affect around 120,000 students in more than 170 Jordanian schools. There is also concern that Syrian refugee children could suffer elsewhere in the region.

Joseph Nhan-O’Reilly, Head of Education Policy at Save the Children, told Their News: “Cuts in international assistance both to UN agencies, NGOs and refugee hosting countries throughout the region will have a devastating impact on services for refugees, including education.

“Multi-year, sustained and timely funding to educate refugees in the Syria region remains as urgent as ever. At multiple annual Supporting Syria and the Region conferences, donors have made welcome financial commitments - but donors must deliver on their promises.

“Without adequate funding and tracking, the international community is letting down millions of vulnerable children and youth.”

Theirworld's #YouPromised campaign has been pushing for two years for the pledge to get every Syrian refugee child in school to be kept. Progress has been made - 1.4 million Syrian child are now getting an education in Turkey, Lebanon and Jordan. But more than three in 10 are still out of school and at risk of child labour, early marriage and exploitation.

Nhan-O’Reilly added that Save the Children continues to support education of both refugees and host community children in Jordan but funding is “definitely a challenge”.

The charity is also working to mobilise funding from other sources and pointed to a “groundbreaking partnership” with Pearson and the Ministry of Education in Jordan to support refugee children.

“We’d love to see more examples of this type of support from the private sector and private philanthropy,” Nhan-O’Reilly added.

The calls for continued international support for refugees came ahead of the UN General Assembly next week when a High-level Meeting on Action for Refugee Education will take place in New York.

The co-hosts of the meeting are UNHCR, Save the Children, INEE, UNICEF, UNESCO, Education Cannot Wait, Global Partnership for Education and World Bank.

The event will bring together refugee hosting states, donor governments, multilateral institutions, the private sector and civil society, to agree on how to improve efforts to deliver the education commitments in the New York Declaration and Global Compact for Refugees.

Nhan-O’Reilly - co-chair of next week’s High Level Meeting - said a main aim is to “galvanise meaningful action” to deliver the commitments to refugee education in the Global Compact on Refugees.

“More than half of the world’s refugee children – four million – remain out of school. And in the last year alone that figure has grown by half a million. Our efforts to close the education gap for refugees aren’t keeping pace with displacement,” he said.

“We want the meeting to be the moment at which we move from rhetoric to results and agree on the practical steps we’re all going to take to deliver meaningful progress.”

UNHCR has also called for urgent funding of some $270 million to ensure that vulnerable Syrian refugees and IDPs do not miss out on vital protection for the remainder of 2018. 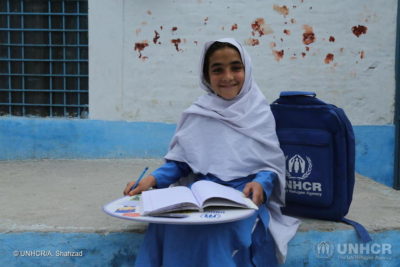