Greece and UNICEF commit to a framework that will create formal education for 26,000 refugee children

Theirworld has succeeded in unlocking big change for thousands of refugee children in Greece after the government there committed to providing them all with an education in cooperation with the United Nations.

The government’s plans follow a blueprint for reform set out by Theirworld in our 2020 report, Finding Solutions to Greece’s Refugee Education Crisis.

“Today is a breakthrough for refugee children and the Greek government. Theirworld has been proud to collaborate with the UN agencies, Education Cannot Wait and government officials,” said Justin van Fleet, president of Theirworld.

“We are happy to see the blueprint for action being taken forward in time for the new school year.”

A Memorandum of Understanding called “Education for All Children” signed this week by Sofia Voultepsi, Deputy Migration Minister, and Luciano Calestini, Representative of the United Nations Children’s Fund (UNICEF) in Greece, commits to providing a route for all 26,000 school-age refugee children in Greece into formal education in a three-year programme expected to cost €34 million. Currently, only 40% are enrolled in Greek schools.

In a statement, Ms Voultepsi said: “We want all children to start from the same starting point, because this is a cornerstone of the struggle for respect for human and democratic rights. It is a pioneering idea that we are committed to serving with dedication.”

Greece is home to about 90,000 refugees, more than half of them children. The vast majority have fled repression, violence and conflict in Syria, Afghanistan and Iraq.

Mr Calestini said: “We would like to thank Theirworld for its critical support for refugee education in Greece and for the vision for change it presented. It has offered acutely at-risk children some sense of normality and the chance to imagine a better life. As well as Theirworld, we are committed to working with the government of Greece, the EU, and all partners to make the comprehensive education response a reality.”

He added that discussions are ongoing with the European Commission’s Directorate-General for Immigration and Home Affairs (DG HOME) to ensure that the programme will be allocated the resources required to succeed.

Most refugee children land in one of Greece’s eastern Aegean islands. By that time, they may have already missed 12-18 months of schooling. With an added wait for education in Greece, they experience a huge deficit of learning which limits their development and their chances of ever being prepared to play a useful role in the workforce, wherever they may end up.

In 2018-19 there were a total of 42,000 refugees on the islands alone, living in appalling conditions, though the number has declined during the Covid-19 pandemic. Most eventually move to the Greek mainland, where UNICEF working with local organisations will create education centres in time for the new school year in early September.

Theirworld’s 80-page report, written by the global education expert Maysa Jalbout, called on the European Union to do more to recognise the pressure and drain on Greece’s education system and to find funding to support the country’s willingness to expand refugee education. It also called on the Greek government needs to demonstrate more thorough planning that would inspire greater support, and set out how that could be done. Those calls have now been answered.

By the end of 2021, Theirworld will have invested more than $5 million in the refugee education response on the Greek Islands through its partnership with Education Cannot Wait and Nationale Postcode Loterij, supporting local organisations working alongside UNHCR and UNICEF.

actions
Give every child a safe place to learn 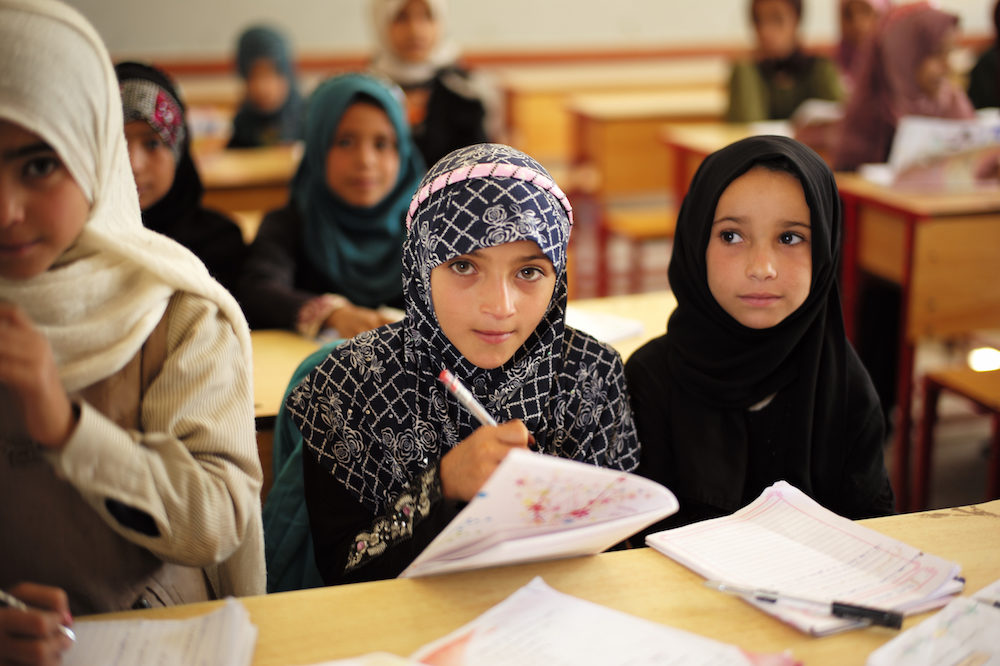 Can we count you in?

Every child deserves a safe place to learn, especially refugees and children affected by emergencies and conflict.