A young boy from the Philippines - pictured at a makeshift desk doing his homework in the street, under the lights of a McDonald's restaurant - encapsulates the great paradox of global education today: more young people than ever before realise the importance of the right to education but too few adults are making that right into a reality.

Most of us have a home and yet find it difficult to persuade our children to do homework.

Daniel Cabrera, just nine years old, lives and studies on the streets of Manila because his home was burned down shortly after his father died suddenly.

Left homeless, he now lives with his widowed mother and brother in the same street food stall where she works. Sleeping rough, he needs the bright light from McDonald's to do his homework in the evening. How else would he see his jotter and study his books?

Against the odds, Daniel is fighting hard to get an education. At school he is considered a lively, studious and enquiring pupil and is clearly driven to continue learning outside the classroom, no matter what the conditions. But are we doing enough to help him and millions like him?

Aid for education in sub-Saharan Africa is pitifully low

The photograph, which has gone viral, coincides with the news that we don’t take education seriously enough to ensure 124 million out-of-school children are in education.

Indeed, 59 million primary-age children are not at school and may never even enter a classroom. What’s more, there are millions more who are being badly taught. While technology yields the ability to improve learning, 90% of all children in sub-Saharan Africa are in primary schools without electricity.

Daniel is not alone: 1.3 billion people - nearly one in five - do not have access to electricity, meaning that children have limited time to read or study.

Yet just at the time that young people such as Daniel show they want to study hard and get an education, support for education is falling.

Annual aid for basic education has fallen 22% in the past four years from $4.5 billion to $3.5 billion. In case you assume education aid was too generous, the figures are just $11 per child in  Guinea, $10 per child in the Democratic Republic of the Congo, $5 per child in Chad, and in Nigeria - which has the highest out-of-school population of any nation - just $4 per child.

Children in Kibera, Kenya, show they are #UpForSchool

The Philippines has made great advances but it still has 1.2 million children out of school. In Africa the out-of-school figure exceeds 25 million.

That is why the campaign for universal education must continue, must grow and must deliver; why the #UpForSchool Petition - which has already attracted eight million signatures - needs even more support.

It will be presented to United Nations Secretary-General Ban Ki-moon and already has support from schools in the United Kingdom, charities in Bangladesh and celebrities as varied as the makers of Angry Birds and, only last week, Justin Bieber.

If one nine-year-old boy can emerge from the darkness and show the world how important education is perhaps the adults who can make a difference will finally see the light.

So much to shout about: what the Oslo Education Summit achieved 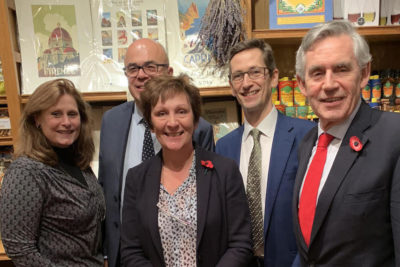