Eight in 10 of the world’s poorest children – almost 50 million boys and girls – are missing out on vital education in the first few years of their life because of a chronic lack of funding in pre-primary education, according to a new report published today.

Spending on pre-primary education accounts for less than 1% of the international community’s aid to education – equivalent to just 34 cents per child, per year – according to analysis by Cambridge University academics for Theirworld, the global children’s charity.

The US, France, Denmark and Germany are among the 16 countries that commit less than 0.5% of their education aid budget to pre-primary education. The UK devotes 1.1%, closely behind Italy (1.8%), Belgium (1.9%), the Czech Republic and South Korea (2.2%). See graph below.

The report – A Better Start? -A Progress Check on Donor Funding for Pre-primary Education and Early Childhood Development – analyses data submitted by international donors to the OECD’s Development Assistance Committee Creditor Reporting System. The most up to date figures are from 2019 so reflect investment before the Covid-19 pandemic.

The analysis shows that the proportion of aid spent on pre-primary education has been increasing – but from a very low base, increasing between 2015 and 2019 from just 0.8% to 0.9%, the highest level since records began.

The report concludes that 6.4 million more children a year in low-income countries would benefit from pre-primary education if donors stepped up and met Theirworld’s recommended 10% target.

Investing in pre-primary education pays off. According to one estimate, for every dollar put into early childhood care and education, world leaders can expect a dividend of $17 in return.

Professor Pauline Rose, director of the Research for Equitable Access and Learning (REAL) Centre, University of Cambridge, and one of the report’s authors, said international donors need to wake up.

“The first five years of a child’s life are among the most critical for their long-term development and the benefits of investing in pre-primary education are found to be the greatest for the most disadvantaged,” she said.

“It is nothing short of a tragedy that world leaders are failing to prioritise spending in this area. The international community must wake up and step up. Without urgent action, the risk is that some of the world’s poorest and most marginalised will continue to fall behind.”

Sarah Brown, Chair of Theirworld, said: “Covid-19 has exacerbated the global education crisis and pushed the world’s poorest children further to the margins. We cannot let this continue.

“Over the next 12 months, world leaders have a series of opportunities at high level meetings, where global stimulus plans will be developed, to show their commitment to the provision of quality pre-primary education.”

Justin van Fleet, President of Theirworld, said: “We know that funding pre-primary education is the most important and impactful thing world leaders can do to give children around the world the best start in life and to put economies back on track following the pandemic.

“Thanks in part to our campaigning, progress has been made – but it’s not enough. It’s time for world leaders to walk the walk and invest 10% of their education aid budgets to the early years. Anything less is a failure for the world’s children.” 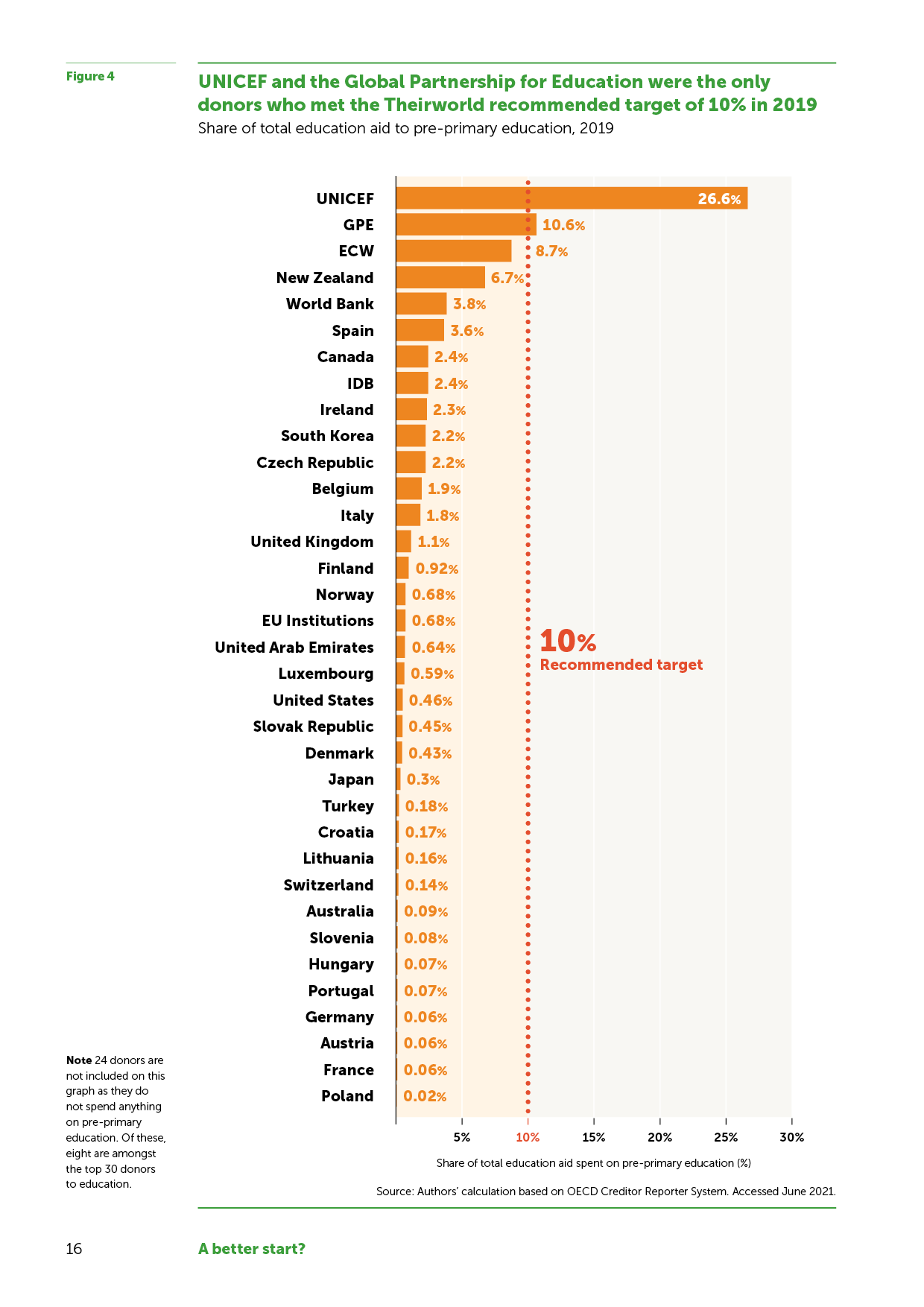 Head of Partnerships and Media

Theirworld is a global children’s charity committed to ending the global education crisis.

It anticipates, targets and solves the complex barriers keeping children and young people from education and opportunity. The organisation mobilises the power of campaigning, policy change and innovation to provide every child, especially the most marginalised, with the best start in life, a safe place to learn and skills for the future.

Informed by breakthrough research and activated by an influential network of partners, Theirworld works with governments, businesses, NGOs, young people and campaigners to develop and deploy solutions to unleash the potential of the next generation.

About the REAL Centre

The Research for Equitable Access and Learning (REAL) Centre is part of the Faculty of Education, University of Cambridge. The Centre pioneers research into overcoming barriers to education, such as poverty, gender, ethnicity, language and disability, and promotes education as an engine for inclusive growth and sustainable development.

The Centre applies rigorous research methods, drawing together the Faculty’s strengths in development conceptualising, measuring and analysing education inequalities, and in identifying the pathways through which excellence and equality in education transforms societies. It works in partnership with organisations and individuals in priority countries, jointly defining, planning, implementing and analysing the research in ways that contribute to joint publications. And it ensures impact by linking evidence with policy at a national and global level.