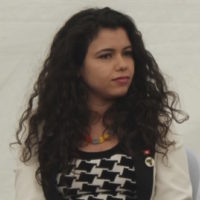 Aya Chebbi, an A World at School Global Youth Ambassador from Tunisia, gave a speech at a UN Women event to mark the 20th anniversary of the historic Fourth World Conference on Women in Beijing - which led to a blueprint for advancing women's rights. The event - called Planet 50-50 by 2030: Step It Up for Gender Equality - was held on March 10 in New York and included speeches from UN Secretary-General Ban Ki-moon and former US secretary of State Hillary Clinton.

Here is what Aya said:

I come from a region that is considered the most dangerous in the world; yet, in Tunisia we have successfully achieved considerable milestones in democracy and stability.

In 2010, we revolted for dignity and freedom. We were the spark of an uprising the world propagated as the Arab Spring. But we call it “the revolution of dignity”. Young women like me took to the streets, unafraid to die. When I reflect on the past four years, I recognise the boldness of my generation to shape our destiny and that of future generations.

But who was behind our victory? It was the Tunisian people including Tunisian women who chose to be part of history…  the history that had been steered towards depriving women equal opportunities and marginalising the youth. We decided to rewrite this history and make it right for the generations to come.

But there still are challenges. In Egypt, virginity tests are performed on female "protest" detainees, a humiliating and terrorising practice. In Syria, over 15,000 women have been killed by the regime to date and over 8000 others subjected to sexual violence.

However, this is not our first struggle, it’s not our first victory. Women where I come from have been fighting patriarchy for more than a century, fighting for social change, equality and democracy for decades.

So, the world must respect our right to define our own struggles, in our own contexts, a context that has been affected by post-colonialism, Orientalism and Islamophobia.

Through the efforts and sacrifice of young women, our mark upon dignity and equality shall not go unrecognised; our experiences shall not go unnoticed.

Article 46 of Tunisia’s Constitution stands as an embodiment of the gains we have attained as women through civil action. We have conquered repressive laws and set our country upon the transformative values of equality and dignity.

Our generation of feminist movements in Africa and the Middle East, in conflict zones, and all parts of the world going through hard times, shall continue to be in the frontline. Even when we are set backward, even when many of our counterparts have fallen, we must set our countries upon a constitutional path of maturation and societal awareness of gender equality. Let’s continue the fight.