Malnutrition, fear and unsafe schools are all rife in a country controlled by militia groups.

A "neglected" humanitarian crisis is now touching the life of almost every child in conflict-torn Central African Republic.

Huge numbers are at risk of death from malnutrition. Few make it all the way through school. Nearly a third of girls are married before they are 15 and two-thirds by 18.

The majority of the country is controlled by militia groups and thousands of children are recruited into armed groups. Many more are sexually exploited and abused.

The scale of the nightmare that continues to unfold in the Central African Republic has been laid bare by a report today that reveals two-thirds of all children - 1.5 million of them - need emergency aid. That's an increase of 300,000 in the past two years.

"What we are trying to do under these extraordinary circumstances is to keep children alive," said Christine Muhigana, UNICEF's top representative in CAR.

The report from the United Nations children's agency says more than 43,000 under-fives are at a high risk of dying during 2019 due to severe acute malnutrition.

One in four children have been displaced from their homes. Many were separated from their parents during violence and ended up alone in displacement sites or living out in the open.

Many schools across the country have been shut down because of the ongoing violence or because they have no teachers.

“We need security. Once we have security, you will see all the schools reopen and all the children return,” Gbiassango Kommando Alain, director of the L’Ecole Application Mixte school, told UNICEF.

“Everything that has happened in this country is because people have had no education – so they have become bandits and rebels.”

Olivier Mirindi-Chiza, Chief of UNICEF Bambari Field Office, said: “Whether by the ex-Seleka or the anti-Balaka, children’s rights are trampled on. Both kill children, use them in fighting and attack, loot and occupy their schools.”

Fewer than three in five of CAR’s children make it through primary school and just 6% complete secondary school.

UNICEF has helped set up hundreds of temporary learning spaces and trained thousands of community teachers in CAR.

It has also established catch-up programmes for children who have missed out on classes since 2014, when more than 65% of schools across the country were closed or not operating normally due to the fighting. 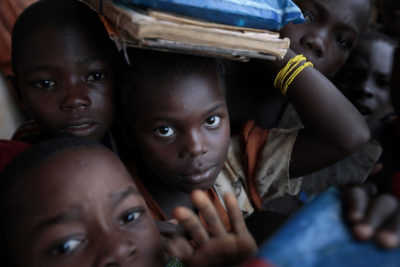