Turkey has spent more than $30 billion on helping its refugees - and the European Union has promised to continue its financial aid.

The six-year Syrian conflict has created one of the world's worst refugee crises - and the country that has borne the biggest burden is Turkey.

Some of the statistics are mind-boggling. Turkey is home to more than 3.2 million Syrian refugees.

About 90% of them live outside refugee camps. Almost half of them are under the age of 18 - and there are almost one million children of school age.

That all adds up to an enormous financial cost for hosting those numbers and providing them with schooling, health and other services.

Since 2011, Turkey has spent $30 billion on the refugee situation - with a big focus on education.

Foreign Minister Mevlut Çavuşoğlu said earlier this month: “There are 976,000 Syrian children of school-going age living in Turkey. 620,000 of them have been able to continue their education.

"We are doing our best to increase this number.”

Theirworld has been campaigning for world leaders to keep a promise made last year to get every Syrian refugee child into school in Turkey, Lebanon and Jordan.

More than half are now in education - but over 500,000 are still waiting for that promise to be kept.

Turkey has achieved a huge amount for refugees since the Syrian conflict began but needs more financial help.

That's why funding from the European Union is a vital part of the response. The EU pledged three billions euros ($3.5 billion) to Turkey's refugee efforts - and 2.9 billion euros has been allocated so far.

"I would like to be very clear," said European Commission President Jean-Claude Juncker at a news conference last week.

Juncker was responding to criticism over perceived delays in providing the funding.

The financing is part of the EU's flagship humanitarian programme - the Emergency Social Safety Net - that has so far reached more than one million refugees in Turkey, with another 300,000 to get assistance.

The EU also has a new 45 million euros ($52 million) deal with KfW development bank to build 50 prefabricated schools. It comes on top of a previous contract last year to construct 15 schools.

As well as the ESSN, the EU is funding the Conditional Cash Transfer for Education (CCTE) project in Turkey.

The programme will support 230,000 children in its first year by making bi-monthly cash transfers to vulnerable refugee families whose children attend school regularly.

Johannes Hahn, Commissioner for European Neighbourhood Policy and Enlargement Negotiations, said: "With the recent signatures of contracts worth over 100 million euros, the EU Facility for Refugees in Turkey continues to deliver its commitment in supporting refugees and host communities.

"A great example of this is the technical and vocational programmes organised with the Ministry of National Education, which aim at increasing employability by facilitating entry into the labour market and thus supporting the integration of refugees in their host communities."

The Turkish Red Crescent in Kilis established such a centre a year and a half ago with the support of EU funds and its programmes include Turkish language and computer classes.

Catering mainly for children and women, it has so far helped 10,000 refugees.

The World Bank recently praised the "tremendous efforts by the government of Turkey" to get children into formal school or temporary education centres.

The bank is working with the education ministry on a $160 million project that aims to build at least 56 disaster-resilient educational facilities to benefit up to 40,000 schoolchildren every year. 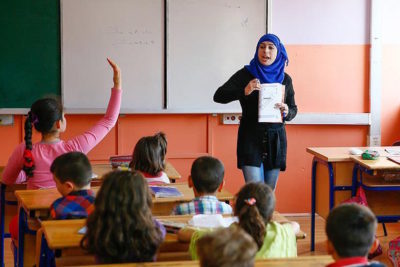