Our roundup includes a movie star's video tribute to 10 of the world's best teachers, a plea not to abandon refugee children and a school meals crisis.

The 10 finalists for the Global Teacher Prize 2019 - which comes with a $1 million prize - were announced yesterday by movie star Hugh Jackman.

In a video message, the X-Men and Greatest Showman star paid a powerful tribute to the work of teachers around the world.

He said: “When I was a kid there were lots of superheroes that I wanted to be.  But I can tell you right now, from where I stand, with all my experience, the real superheroes are teachers – they’re the ones that change the world."

Jackman reveals the finalists in the video below. The winner of the prize, run by the Varkey Foundation, will be announced on March 24.

Thank you, @RealHughJackman 😊and a HUGE congratulations to you all!#HughJackman pic.twitter.com/x1GU26duS5

New funding is needed urgently to prevent millions of children and youth being left without education and hope because of escalating crises, Gordon Brown has warned.

Brown spoke at the UN about the plight of young refugees as he appealed for new funding for education in emergencies. He said two new programmes will be announced this month to help children who are out of school because of conflicts and disasters.

Both will be launched by Education Cannot Wait (ECW) - the fund to deliver education during humanitarian emergencies that was established after campaigning by Theirworld and our Global Youth Ambassadors.

170 students and several staff who were kidnapped from a school in Cameroon were freed the following day.

Gunmen abducted the students from Saint Augustin's College, a Catholic boarding school in Kumbo. It is the largest school kidnapping in the country's English-speaking regions since separatist unrest began in 2017.

In November, almost 80 children were seized from a school in Bamenda, along with the principal and a teacher. All were later freed.

Their News recently looked at the issue of attacks and kidnappings at schools in Cameroon. Joannes Paulus Yimbesalu, a Global Youth Ambassador for Theirworld who is originally from the North-West region, told us: "The circumstances behind some of the recent kidnappings remain unclear but many suspect they are in exchange for a ransom. This is not about hatred of education.

"They are using education to force change, to challenge the government. They have hijacked the education system to be heard and stay relevant."

Children dropping out of school in meals crisis

Share some love today with these school children in #Madagascar 📸
by supporting our school meals programme there 👉 https://t.co/6M5skWeIPu pic.twitter.com/jyxI3eSu0j

A lack of funding is depriving 120,000 children of a daily primary school meal - and education - in Madagascar.

40% of the 300,000 primary school children in Anosy, Androy and Atsimo Andrefana regions who should receive a daily hot meal from WFP have gone without since November.

For many children, the meal of cereal, pulses and vegetable oil fortified with micronutrient powders is their only one. So it is a powerful incentive for parents to send their children to school instead of out to work.

“It’s beyond tragic that our already limited coverage has been further curtailed, depriving some of the country’s most vulnerable children of essential help – even the prospect of a decent future”, said Moumini Ouedraogo, WFP’s Representative in Madagascar. “It costs only $50 to feed a child for a year."

Thousands of schools in Pakistan have no water or toilets

Children at almost 10,000 government-run schools in one province of Pakistan have no toilet facilities - and over 9,000 schools don't have drinking water.

Balochistan has just under 900,000 children attending more than 13,000 primary, middle and high schools. But over one million children are still out of school.

The figures are in education department documents obtained by DawnNewsTV.

They also show that over 7,900 schools in the province do not have boundary walls, while there are 5,296 "one room, one teacher" schools. 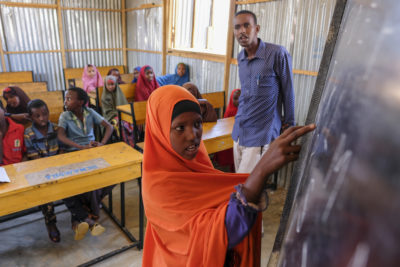