The theme of this year's event in Paris was education in emergencies - and how mobile technology can deliver learning to refugees and other displaced people.

In many parts of the world, you would be hard pressed to find a book. Even in schools.

A study of 16 sub-Saharan African countries found that a majority of primary schools have few or no books. Even in a richer country like South Africa, only 7% of schools have libraries.

But what most people around the world have these days is a mobile phone. The United Nations estimates that six billion people have access to a working mobile and over 90% of the global population is covered by a mobile network.

That was the backdrop to UNESCO's Mobile Learning Week, which ends today in Paris, France. This year's theme was Education in Emergencies and Crises and was run in partnership with the United Nations refugee agency UNHCR.

Innovative solutions are needed to ensure that disruption to #education in conflict situations is minimized #MLW2017 https://t.co/QxcTaDKkwf pic.twitter.com/iOCs4U2icK

Experts, practitioners and government ministers spent five days examining how best to use cheap and widely available mobile technologies for the education of refugees and other displaced people.

More than half of the world's refugees are children. But only half of younger refugee children have access to primary school and just 22% enrol in secondary school.

"Mobile technology offers avenues to help address these challenges and open up the world to students.”

The school-age #refugee population grew by 30% in 2014. How can technology help provide them w/ #education? https://t.co/nVAjZoi6zj #MLW2017 pic.twitter.com/vPp7kx7kYH

Rosalind Hudnell, President, Intel Foundation, said: "The key is not just to give people access to technology, but to enable them to create their own technology’."

Here's a look at some of the issues being explored, announcements made and the impact mobile learning can have on children during and after conflicts, natural disasters and health emergencies.

The growth of mobile

71% of refugee households own a mobile phone and 39% have internet-enabled phones. The vast majority (93%) live in places covered by a 2G mobile network and 62% are in reach of 3G mobile networks.

67% of the world’s population currently own a mobile phone. By 2020 smartphones will account for three out of every four phones and it is estimated that more people will have an internet-connected mobile phone than will have electricity.

The internet giant Google announced it will give $50 million in grants to nonprofit organisations working to improve education in developing countries using tech-based learning tools.

The grants are aimed at three main areas - getting to students in combat zones, providing quality learning materials and aiding in teacher development

Google.org, the company's philanthropic arm, intends to give grants in 20 countries by the end of the year.

The Tabshoura trilingual e-learning platform, created by Lebanese Alternative Learning, was presented daily in the Demonstration Tent at the Paris event.

Theirworld has been piloting the Tabshoura platform - which uses English, Arabic and French - as part of its Tech Hubs in Lebanon since 2015.

Theirworld has Tech Hubs in two schools in Lebanon, which we have equipped with laptops, tablets and e-learning resources. We are also working with Lebanese partner DOT to train teachers on how to use them in the classroom.

The aim is to help Syrian refugee students who are struggling to keep up in class after missing years of school. Methods of teaching which incorporate technology will help to engage them and improve their learning.

The success of this initiative has attracted a lot of investment from donors such as the Dutch Postcode Lottery and Ikea Foundation to scale the model to Lebanon and Jordan.

During Mobile Learning Week, War Child Holland ran a workshop to discuss how the programme could be scaled up to reach one million children with quality education.

The winners of the EduApp4Syria contest were announced by the Norwegian Agency for Development Cooperation.

The competition encouraged entrants to come up with ways to use mobile devices to create engaging literacy and learning supplements for Syrian children, which double as fun, engaging psychosocial support for children dealing with trauma of forced displacement.

The games Feed the Monster and Antura and the Letters were named as the winners.

Teaching the teachers in Kenya

The Kakuma refugee camp is home to 200,000 refugees from 20 countries. It has 21 primary schools and five secondary schools - but there are between 150 and 300 children in each class and 10 children to each text book.

The Teachers for Teachers initiative at the camp means teachers can get mobile mentoring from volunteers from around the world with significant classroom teaching experience. They provide ongoing, real-time support on teaching challenges.

Many others were internally displaced and without access to education as a result of conflict.

UNESCO's South Sudan Office has designed and introduced an app to improve literacy for young women.

Solar-powered digital audio players are also used to train teachers how to use mother tongue alphabet charts for 40,000 children. 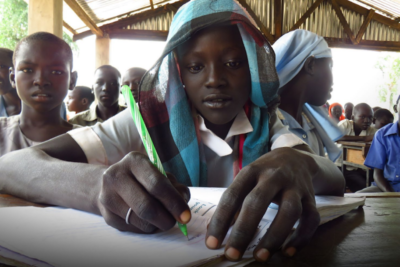 Half of the world's refugee children don't go to school