The importance of early learning for the world's youngest and most disadvantaged children was emphasised at a joint event.

Action is needed urgently to help more than 175 million of the world's youngest and most disadvantaged children get access to crucial pre-primary education.

That was the message from Theirworld and UNICEF as they called on countries and international donors to increase and prioritise their spending on early childhood education.

"It's not that people don't care. Every single donor and every organisation cares - but the commitments have to add up," said Theirworld President Justin van Fleet at an event hosted by the children's charity, UNICEF and the Global Business Coalition for Education in Washington, DC, yesterday .

The 175 million missing out on pre-primary opportunities continue to be a blind spot for domestic and international financing. In low-income countries, the picture is much bleaker - with only one in five young children enrolled in pre-primary classes.

The first few years of a child’s life will shape the rest of their lives. But aid to early childhood education is declining. It's time to #WriteTheWrong and tell donors to stop leaving the youngest behind.

That is despite evidence that 90% of a child's brain development happens before the age of five. The severe lack of investment in early childhood education is putting millions of children at a disadvantage before they even start school.

At the event - titled #WriteTheWrong because #EarlyMoments Matter - van Fleet outlined some of the major findings from Theirworld's report Leaving The Youngest Behind.

He said: "We found that from 2015 to 2017, the money is decreasing. Since the international community got together and said we want every child to have an early childhood education, we've decreased collectively our spending by 27%.

"When you look at what that means, it adds up to 26 cents per child per year in the poorest countries. During the same period, aid to education dramatically increased - but within that we are not prioritising at the same rate the youngest children.

"We'd have a healthier, wealthier and kinder world if every child had pre-primary education."

UNICEF Executive Director Henrietta Fore talked about the agency's report A World Ready To Learn. She said: "Early childhood education is extremely important in a life - and maybe the world forgot it a bit. We have to pick it up again and we have to restart the interest.

"175 million children are missing out on it. So as a world we have to stand up and try to change this.

"It's of crucial importance and it's solvable. It's changeable in every country in the world."

Theirworld’s #WriteTheWrong campaign will mobilise over 1,000 youth campaigners, the business community and the public to draw greater attention to early education.

So it was fitting that the Washington event also heard from Vibhu Sharma, a young disability rights campaigner and inclusion researcher for Theirworld.

She said: "Children with disabilities should be mainstreamed. They should be taught with non-disabled children.

"We have social barriers and stigma to overcome. It would sensitise other children to those with disabilities. Do it from the beginning so that children with disabilities have opportunities. Inclusion cannot wait."

Title: Leaving the Youngest Behind

Produced in collaboration with the Research for Equitable Access and Learning (REAL) Centre at the Faculty of Education, University of Cambridge.

The report reveals that - despite pledging to help some of the world's youngest and most vulnerable children - the international community has cut the funding and prioritisation of early childhood education.

It shows that 16 of the top 25 donors to global education aid gave nothing or reduced their previous spending on pre-primary education.

Children in conflict-affected countries are even worse off, with only 17 cents per child per year directed to early childhood education.

The United States, Sweden, Netherlands and Austria did not report any investment in early childhood education aid in 2017. The United Kingdom and Australia invested just 0.5%, and 0.2% of their education aid in the youngest children respectively, in contrast to the internationally-recognised 10% target.

Around the world rich and poor countries are failing to deliver on the promises made to the world’s youngest children, risking their development and future life chances.

Title: A World Ready to Learn

The report notes that household wealth, mothers’ education level and geographical location are among the key determinants for pre-primary attendance. However, poverty is the single largest determining factor.

Across 64 countries, the poorest children are seven times less likely than children from the wealthiest families to attend early childhood education programmes.

More than two-thirds of pre-primary-age children living in 33 countries affected by conflict or disaster are not enrolled in early childhood education programmes. Yet, these are the children for whom pre-primary education has some of the greatest benefits. 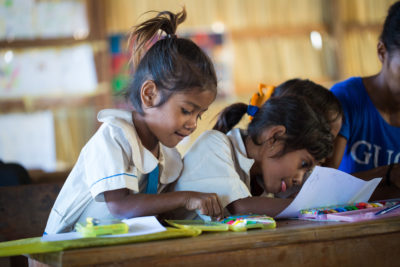