Ban Ki-moon with Hellen at the Oslo summit today

Norwegian Hellen, 23, addressed the gathering and highlighted the growing number of children out of school around the world.

She said: “This is a civil rights movement led by young people demanding our right to an education. We need to see urgency and political leadership equal to the scale of this crisis. It's time for action."

After her passionate speech. Hellen met United Nations Secretary-General Ban Ki-moon and Norwegian Prime Minister Erna Solberg to pass on the messages from people around the world who have signed the #UpForSchool Petition.

The petition, launched by A World at School, is calling on world leaders to take urgent action to get every child into school. It is aiming to be the largest petition ever and urges those meeting in Oslo to deliver education to children in conflict or emergency situations as a priority.

More than one million signatures were added in the past week after Angry Birds released a new #UpForSchool tournament to support the campaign and global star Justin Bieber became the latest celebrity to sign and asked his fans to do the same.

Malala Yousafzai and Ban Ki-moon at the summit

In a speech to the Oslo summit's opening day yesterday, Mr Ban said: "I welcome the #UpForSchool movement - they have enlisted the Angry Birds. My grandson loves that game so I asked him what they are so angry about. He said they blow up pigs but when it comes to education they are angry at injustice”.

Petition signatures have been collected all around the world by young people and organisations. Muslim Aid has collected more than 1.8 million signatures in Gaza, Lebanon and other countries.

On stage at the summit making her speech

A World at School Campaigns Director Ben Hewitt said: “We know that nothing changes without pressure. This is a global movement led by young people around the world and supported by a diverse network of faith groups, businesses, charities and campaign organisations - all coming together to demand world leaders to keep their promise and get every child into school.

"Every day a child is out of school they are at risk of child labour, early marriage and deeper poverty.” 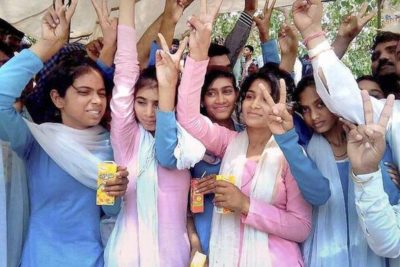