Our weekly news roundup includes a horrific attack that killed 14 schoolchildren in Yemen and how Education Bonds could provide large-scale funding.

We have a separate article about a joint event on early childhood education held in Washington by Theirworld, UNICEF and the Global Business Coalition for Education. Read it here.

The name is bond ... Education Bond

To get every child into school, developing countries will have to step up to invest heavily in their education systems. But best estimates say there will still be a big funding gap to be filled by the international community.

The climate community has used "Green Bonds" to raise more than $500 billion for sustainability projects. With such large-scale success, why not apply this model to education?

That was the question raised by the Global Business Coalition for Education in a discussion memo and at a high-level event yesterday in Washington, DC, where the annual World Bank/IMF Spring Meetings have been held this week.

The memo says: "Education Bonds have the potential to transform education financing by mobilising funding from capital markets that are otherwise difficult to access."

#EducationBonds could generate significant new funding for #SDG4. Today at #WBGmeeetings, we're releasing a new memo with @GBCeducation about the success of #GreenBonds and the potential of this model to work in education. https://t.co/yd7F9JNfs5

“We should learn how the Green Bond developed and became a mainstream instrument for investment. I see Education Bonds as a long term-investment and a way to provide a bridge for developing countries,” said Ngozi Okonjo-Iweala, former Nigerian finance minister.

The memo highlighted how the new International Finance Facility for Education (IFFEd) could stimulate a new class of fixed-income instruments focused on investments in education.

The coalition also announced a partnership with Atlassian Foundation that will fund the credit rating process for IFFEd.

A mass funeral has been held for children killed in an explosion near two schools in war-torn Yemen's capital Sanaa. The blast killed 14 children and wounded 16 others on Sunday, said UNICEF. Most of the casualties were girls under the age of nine.

The UN agency said the explosion happened as children were getting ready for their lunch break. It hurled broken glass and shrapnel into classrooms.

UNICEF spokesman Christophe Boulierac said: “One in five schools can no longer be used as a direct result of the conflict. Some came under direct attack, while others are being used for military purposes.

"For more than two million children in Yemen today, going to school is a faraway dream.

Huthi rebels accused the Saudi-led military coalition backing the government of killing the children in an air strike. But the coalition denied conducting any air raids on the capital on Sunday.

Last year at least 29 children were killed when a school bus was hit by an air strike in Yemen.

Children in six developing countries will benefit from high-quality schooling thanks to new grants of $176.6 million from the Global Partnership for Education (GPE).

The funding will help the governments of Benin, Burundi, Nepal, Papua New Guinea, Tanzania and Uzbekistan to strengthen their national education systems.

“GPE financing is at work in countries around the world helping governments to give children – particularly girls and other vulnerable groups – the knowledge and skills to thrive," said GPE Chair Julia Gillard. Learn more about the six grants.

World's best teacher to be champion of children in conflicts

Get to know our new Champion for Children in Conflicts and Crises @petertabichi. 'The students I teach see true hardships.. But I also see in them raw talent and great creativity, hard work, a determination to defy the odds, and be the best they can be.' https://t.co/BdV4wmucXg pic.twitter.com/lhJWpXtePy

A Kenyan teacher named as the best in the world has been appointed as the first Champion for Children in Conflicts and Crisis. Peter Tabichi - winner of the 2019 Global Teacher Prize - will promote the cause of Education Cannot Wait, the fund for education in emergencies.

"Every child, everywhere in the world deserves the chance to fulfil their full potential,” said Tabichi, who is also a Franciscan Brother and gives 80% of his teaching salary to the poor in his community. “Education Cannot Wait is doing vital work to make sure these children are not left behind.

Education Cannot Wait (ECW) has also signed an agreement with the Islamic Development Bank and a wide range of stakeholders for a global education coalition. It aims to enrol and retain 28 million out-of-school children in countries that are members of the Organization of Islamic Cooperation (OIC) by 2021.

ECW Director Yasmine Sherif said: “There is an urgent need to enhance the quality and inclusion in education, and to reopen thousands of schools in OIC countries like Afghanistan, Niger, Syria, Yemen and many others.”

ECW has also announced a $11.7 million seed funding allocation to support the launch of a ground-breaking, multi-year educational response programme aiming to reach 320,000 children in the State of Palestine. It will target some of the most vulnerable and at-risk children and youth in the West Bank and the Gaza Strip, with special attention given to marginalised groups such as girls, children with disabilities, and Bedouin and pastoralist communities.

77 schools destroyed by floods in Iran

Devastating floods that have been affecting Iran for several weeks have destroyed at least 77 schools .

The worst rains in 70 years began on March 19 and have continued, causing floods, dams to overflow, rivers to burst their banks and landslides.

Scores of people were killed and hundreds were injured, in addition to thousands who were left homeless.

The NGO Mehr Giti said an assessment of affected areas found at least 77 schools destroyed - 55 in Lorestan Province and 22 in Golestan.

The organisation called for more cooperation between government and non-governmental bodies in the rebuilding of schools to ensure no child misses out on education. 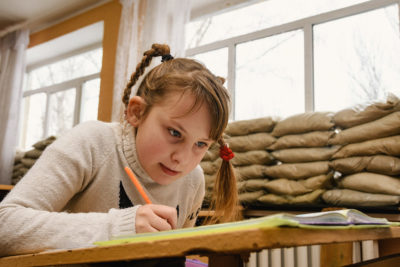