As the conflict enters its eighth year, we look at the effect on Syria's children, their education and their futures.

It started with an anti-government "Day of Rage" on March 15, 2011. Today, the conflict in Syria is entering its eighth year.

More than eight million children have been directly affected by the conflict - six million of them inside Syria and another 2.6 million who are registered refugees in other countries.

To mark the seventh anniversary, we look at the staggering statistics behind the war and seven ways in which the children of Syria have borne the brunt.

2017 was the deadliest year for children in Syria - with 910 killed and 361 injured, according to UNICEF. That was 50% more than in the previous year.

In the first two months of 2018 alone, the UN children's agency said 1000 children were reportedly killed or injured in intensifying violence.

But the UK-based Syrian Observatory for Human Rights puts the figures much higher. Since the start of the conflict, it says 19,811 children have been killed.

Tens of thousands of children have also been left with permanent, war-related impairments - including many whose injuries have led to amputations.

Attacks on their schools

The UN verified 2909 grave violations against children last year - including 89 attacks on schools. A World Bank report last year said 49 education facilities had been destroyed in Aleppo alone and that many schools had become military bases and targets.

But some organisations put the number of attacks on schools as high as 4000 over the seven years of the conflict.

Fear of attack has also closed many schools. In Afrin region, for example, 261 primary schools and 50 secondary and higher education institutions with 65,000 students are currently shut because of the fighting.

The highest single death toll came in 2016, when 22 children and six teachers were killed when air strikes hit a school in the village of Haas in Idlib province. A rocket hit the school entrance as children were preparing to go home.

Despite efforts by neighbouring countries and the international community, an estimated 1.75 million school-aged children in Syria and more than 40% of Syrian refugee children remain out of school.

The good news is that just over half (54%) are enrolled in formal education and 3% in non-formal education. At the end of December, over 1.06 million Syrian children across the region were at schools located in camps and host communities.

World leaders promised at a London conference two years that every Syrian refugee child would be in school. But 43% are still getting no education at all.

As well pushing to get every refugee child in school through our #YourPromised campaign, Theirworld has been running education pilot projects in Turkey and Lebanon.  Our Turkey project identifies cost-effective interventions to get around the economic, cultural and language barriers that prevent Syrian refugees from getting an education. Our Lebanon project works to expand access to education through research, advocacy and campaigning.

Fleeing from their homes

A total of 6.1 million Syrian people have been uprooted from their homes and forced to relocate within the country, while another 5.5 million have fled as refugees. There are 2.6 million registered Syrian refugee children.

Turkey is home now to more than 1.5 million Syrian refugee children. Lebanon hosts about 550,000 Syrian children and more than 300,000 are in Jordan.

Apart from the out-of-school problems, over 40% of five-year-old refugee children in Jordan are not enrolled in early childhood education.

“While the focus is on the devastation inside Syria, we should not forget the impact on the host communities in the neighbouring countries and the effect that so many years of exile has had on refugees,” said Filipo Grandi, the UN High Commissioner for Refugees.

Refugee children, particularly those who are out of school, are vulnerable to many risks - including isolation, discrimination and different forms of exploitation. That includes early marriage, child labour and recruitment by armed forces or criminals.

The number of girls leaving school to become child brides has been rising in Turkey. And in Lebanon, 40% of Syrian women between the ages of 20 and 24 were married before they turned 18.

Inside Syria, almost 1000 children were recruited to fight in combat roles last year, said UNICEF. Many of them are under 15 and some even as young as 12.

The UN said about 180,000 Syrian refugee children in Lebanon have been forced into child labour.

About 85% of all registered Syrian refugee children are living below the poverty line, according to new figures last month. 94% of under-fives living in host communities are “multidimensionally poor”, meaning they are deprived of a minimum of two out of the five basic needs – education, health, water and sanitation, child protection and child safety.

In Lebanon, 76% of displaced Syrian families living below the poverty line parents cannot afford the books, bus fares and uniforms needed to send their children to school. 66% of refugee children there were withdrawn from school as families struggled to survive.

Inside Syria, conditions are worse than ever, with 69% languishing in extreme poverty. Nine in 10 families now spend more than half of their annual income on food, while food prices are eight times higher than pre-conflict levels.

In a war zone, toxic stress can be as much of an enemy for young children as armed fighters or bombs. Exposed to periods of prolonged fear, chronic neglect or abuse, poverty and hunger, a child’s "stress response" will go into overdrive - with devastating consequences. 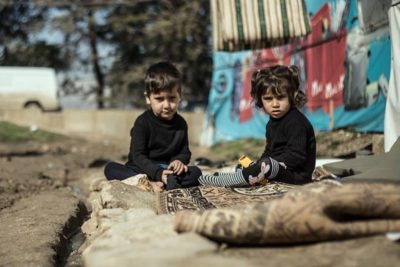