In a country where 72% of children are out of school, the number of street kids facing danger and exploitation is increasing daily.

When Malit ran away from home a year ago, he didn't know he would be eating from the garbage and sleeping rough.

But the 12-year-old insists life on the streets of Aweil, a city in South Sudan's northwest, is better than the one he left.

"My father left us and moved to Sudan and my mother wasn't able to cook food for us every day," Malit told the Thomson Reuters Foundation, devouring a mango including its peel. "I was always hungry. That's why I decided to run away."

Hunger, fuelled by a protracted civil war and a failed economy, has pushed children like Malit into labour or life on the streets, according to a report by the United Nations' Food and Agriculture Organization (FAO).

South Sudan - the world's youngest country which gained independence in 2011 – is wrestling one of the world's worst humanitarian crises.

The United Nations children's agency UNICEF says every second person in the population of 12 million is hungry, 72% of children are out of school and 4.2 million children need help.

The United Nations says almost 19,000 children have been recruited - many by force - by armed groups in the civil war that started in 2013 when clashes erupted between troops loyal to President Salva Kiir and his former deputy Riek Machar.

Malit roams the streets with two other children during the day seeking food. The three are often on the lookout for ways to snitch some money. None attend school.

Malit says there are hundreds of street children in Aweil. In the capital Juba, up to 3000 children live on the street and that number is increasing daily, said the Mind and Soul Institute, a local charity that works with street children.

Tens of thousands of people have since been killed since the war erupted and a third of the population fled their homes. The economy and security have deteriorated. A peace deal signed in 2015 was later ignored and a ceasefire negotiated in December was violated within hours.

Peace talks resumed in Ethiopia's capital Addis Ababa on February 5 and are ongoing.

Children suffer worst of all, said Bester Mulauzi, country director of programme development for Save the Children that gives cash and farming supplies to families to help keep children off the streets.

There is no child labour law in South Sudan that is specifically protecting children. (The issue) is not taken seriously, also because of cultural beliefs

"Children living on the streets face unimaginable dangers. They risk being forcibly recruited by armed groups and are more likely to be abused and exploited," he said.

"Many children are working and living on the streets simply out of sheer necessity to feed themselves."

4.7 million are at risk of dropping out of school during 2018 in South Sudan, Somalia, Ethiopia and Kenya, Save the Children has warned.

In South Sudan, malnutrition has soared, especially among children. More than 1.1 million under-fives are forecast to be malnourished in 2018.

Others, like six-year-old Akok, are tasked with caring for younger siblings. Akok's mother left their remote village near the border with Sudan a year ago, bringing two children to Aweil where they stay at a friend's compound.

During the day, Akok looks after her baby brother while her mother scours the town for food, which she regularly sends to her village for Akok's other siblings.

Dinner for Akok is often just leaves. Her bed is the floor of the compound which the family shares with some goats.

"My mum is away all day and it's scary. If something happened to my baby brother, I wouldn't know what to do," she said.

Nicholas Kerandi, a food security specialist at the FAO, said children had to care for their siblings in many households as the men had joined the army or left to find work in Sudan.

"(That) leaves women with incredibly little time to both provide food and care for their children," he said. "Child care then often becomes the responsibility of the older brothers and sisters."

Many children are also compelled to work.

Nyang, 13, gets up before dawn to spend the day at one of Aweil's brickmaking sites, carrying clay cubes up a hill to dry in the sun. About 30 children work at the site, which is the size of two football fields, for less than one dollar a day.

"There is no child labour law in South Sudan that is specifically protecting children. (The issue) is not taken seriously, also because of cultural beliefs," said James Alau Sabasio of the Mind and Soul Institute.

Nyang said he is the only one in a family of 10 earning a salary.

"My father is a teacher but hasn't been paid in the last year and my mother collects firewood and tries to sell it," he said.

The bricksite manager is 28-year-old Thong, who does not object to employing children.

"They are cheaper and still work hard," he said, adding that he is respected in his community and helps many families to survive. He said the conflict and a lack of food are the reasons so many children work or live on the street.

Gathered around a fire at night with friends, Malit said he missed his family and wanted to go home.

"But I know there is no food. My friends take care of me now," he said. "If more food comes to this country, I will go home to my family." 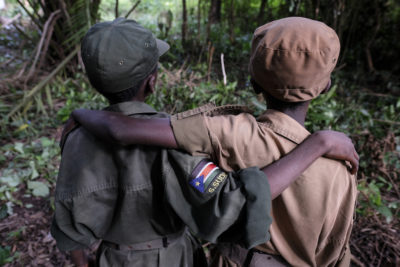 Arm in arm, these child soldiers are free to return home and go to school 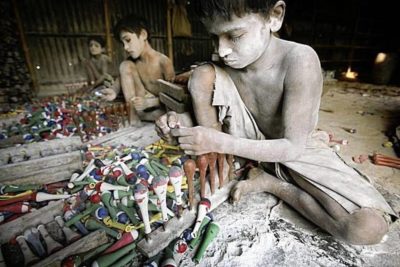