World leaders heard that progress has been made in delivering education to Syrian children - but more urgent action is needed to keep a promise to get every child in school.

The number of Syrian refugee children who are in school has increased - thanks to the efforts of their host countries and partners.

But 534,000 have yet to set foot in a classroom. That means more funding and clearer planning is needed urgently if world leaders are to keep their promise to educate every single refugee child.

That message rang out loud and clear today at a high-level conference in Brussels to gauge the progress of humanitarian efforts to help Syrians inside and outside the war-torn country.

The talks came 14 months after an initial Syria conference in London vowed to get every refugee child into school during the 2016-17 academic year at a cost of $1.4 billion annually.

Theirworld's #YouPromised campaign has been pressing for months for the pledge to be kept and for more transparency from the international community around the funding processes.

A special education report - presented to today's Supporting the Future of Syria and the Region conference - shows that some progress has been made.

But there is still much more to be done if those half a million children are to get an education and a future.

Theirworld President Sarah Brown wrote in a blog today: "There is no time to waste. Every missed year of school adds to boys’ and girls’ lost childhoods.

"It is imperative for the children of Syria and the credibility of the international community that we are focused and transparent in our efforts."

The report showed that:

The aim must be for all Syrian refugee children to be in full-time education - not just at informal classes.

Preschool education is also vital for younger children if they are to fulfil their potential. But there is virtually no mention of it in the report.

In its "Way Forward" section, it only says: "The education response needs to be embedded within a lifelong learning approach that starts from early learning and continues through tertiary education levels."

Despite the statistics and a lot of rhetoric at the conference - co-hosted by the European Union, Germany, Kuwait, Qatar, United Kingdom and United Nations - there is still a lack of long-term funding and no clear budget details for the 2017-18 academic year.

Donations are falling far short of the $1.4 billion per year which the co-hosts agree is needed to educate every refugee child. The money must come through urgently and regularly if all children are to get into school.

As the report said: "Funding to education continues to be far from the London $1.4 billion ask and needs to be further sustained, predictable and timely."

In his closing remarks, Christos Stylianides, EU Commissioner for Humanitarian Aid and Crisis Management, said the conference had made pledges of $6 billion for 2017.

He talked about the challenges faced by Turkey, Lebanon and Jordan and assured them "of our continued support”.

He added: "We agreed to continue to work towards ensuring No Lost Generation of children in Syria and in the region to to increase our efforts to reach our goal set in London - namely of getting all refugee children and vulnerable host children in quality education as well as to increase access to learning for 1.75 million children out of school in Syria."

But five international organisations working on the Syria crisis - Oxfam, CARE International, International Rescue Committee, Norwegian Refugee Council and Save the Children - issued a statement calling for more action to help those affected.

It read: "Last year in London, governments made unprecedented pledges to support refugees and Syria’s neighbouring countries, and provided additional and multiyear funding to deal with the crisis.

"The follow-up at Brussels has not matched this yet and we expect pledges to be significantly lower than last year.

London was an important first step, at Brussels the international community stood still.

"Governments had the opportunity today to build on the commitments at London, to provide the legal protections refugees need, better education opportunities and decent work for millions in neighbouring countries, as well as increase humanitarian and development funding to help make this a reality.

"Rich countries had the opportunity to show solidarity and share responsibility for refugees by increasing resettlement and other admissions. Practically, none of these opportunities were taken.

"London was an important first step, at Brussels the international community stood still."

Human Rights Watch called today for barriers to be removed to get more refugee children into education.

“It is still too hard to find answers to basic questions about whether Syrian children are getting an education and, if not, why,” said Bill Van Esveld, a senior children’s rights researcher at the organisation.

“It is crucial that donors and host countries collect the information needed for Syrian children to get into school.”

In Syria itself, 2.3 million children and youth are still out of school and a large number are at risk of dropping out.

Watch what Norway's foreign minister Borge Brende said about his country's contribution to Syrian refugee education and then about the overall situation. 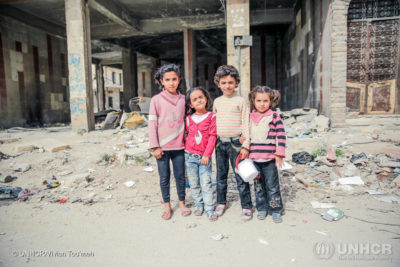